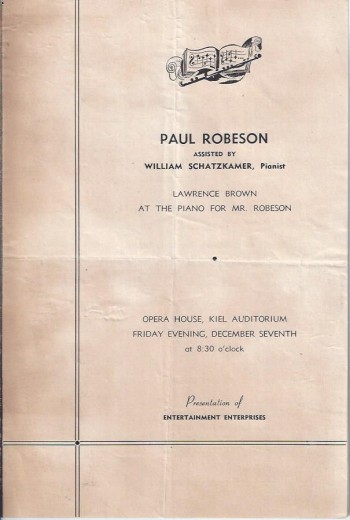 This program for a concert at The Kiel Auditorium in St. Louis has been folded in fourths and has some light toning along the spine. It is not dated but the St Louis Municipal Auditorium was remamed Kiel in 1943. Paul Robeson and Lawrence Brown began performing together in 1925 and continued for 40 years. William Schatzkamer frequently appeared with Robeson in the 1940's. This concert features a wide variety of music, from Old English Airs, classical songs and Negro folk songs by Robeson accompanied by Brown, to both classical pieces and folk songs by Schatzkamer on the piano. Some of the Neg... View more info 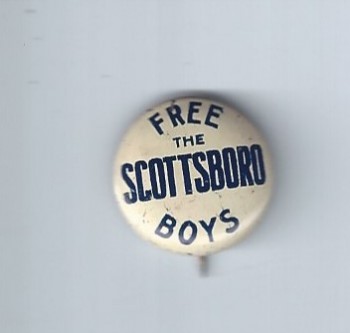 By: Local 4 Amalgamated Lithographers of America

Nine African-American, Alabama teenage boys were arrested in 1931 on a charge of raping two white girls on a train in Jackson County , Alabama. The trials and appeals lasted for years and went all the way to the US Supreme Court. The boys' cause was taken up by the International Labor Defense (ILD), the legal wing of the American Communist Party. The case was partly funded by the sale of various pins such as this one, made by Local 4 of the Amalgamated Lithographers of America in Chicago. Their stamp is on the back of the 7/8" pin, along with a Union Label and an item # 1215675. Conditon ... View more info