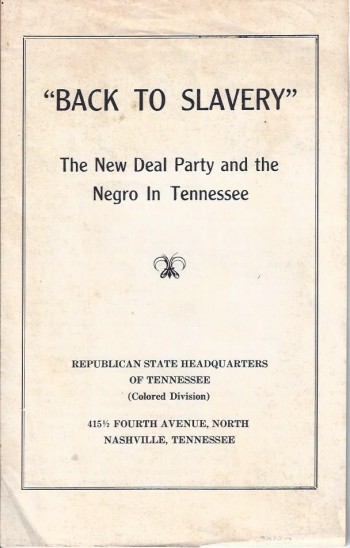 Single-fold (4 pp.) heavy-stock, newsprint pamphlet with general light wear and aging with some minor, flattened creasing on corners. Overall VG. This pamphlet produced by the Colored Division of the Tennessee Republican Party goes into detail on segregationist policies of the New Deal Democrats in Tennessee, especially in regard to Civil Service positions, specifically the WPA, NYA and Census. It also mentions Democratic "Jim Crow Offices" and the cynical hiring of blacks to work in predominantly African-American areas of Nashville. The pamphlet is not dated, but since this was used a...
View More...