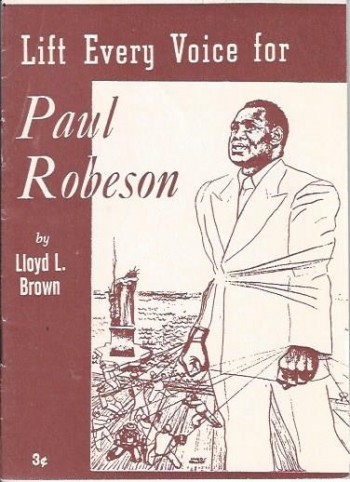 Lift Every Voice for Paul Robeson

Stapled, small deep brown and white pamphlet with drawing of Paul Robeson bound in ropes, like Gulliver, with little men pulling the ropes tight. The pamphlet has almost no wear and may be slightly aged. Near fine. Lloyd Brown was a union organizer. He wrote this pamphlet to protest the US Government's seizure of Paul Robeson's passport because of Robeson's sympathies toward Communism. This pamphlet was also used to raise money for The Provisional Committee to Restore Paul Robeson's Passport. WorldCat locates fewer than 20 copies of this pamphlet. ; Sepia-Toned Drawing; 24mo 5" - 6" tall; 14 p... View more info