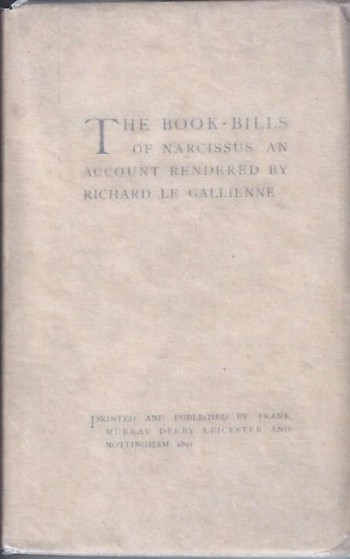 The Book-Bills of Narcissus: An Account Rendered by Richard Le Gallienne

This is one of 250 copies of the Small Paper Edition of which 240 were for sale. The book has stiff but flexible covers with a French fold stiff paper wrapper which itself is encased in a French fold thin paper wrapper. The stiff paper is still partially attached to the covers at the spine. There is some age toning on the paper wrapper and some foxing on endpapers. Overall the book is square and securely bound and still quite attractive with a 19th century dust wrapper. ; 12mo 7" - 7½" tall; 87 pages

Title: The Book-Bills of Narcissus: An Account Rendered by Richard Le Gallienne

The Book-Bills of Narcissus: An Account Rendered by Richard Le Gallienne