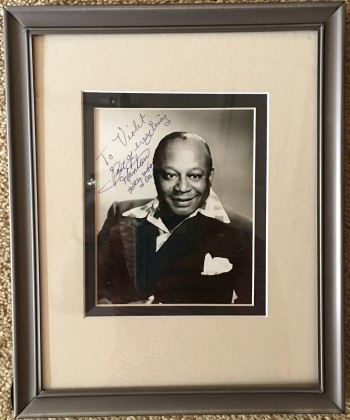 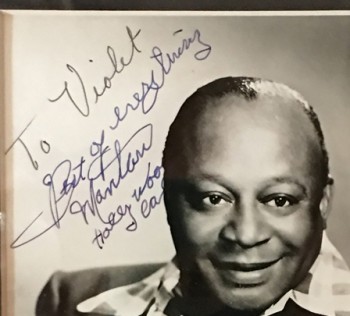 This is a framed, B&W, autographed photograph of African-American actor, Mantan Moreland. The photo is inscrbed "To Violet" and is signed "Best of everthing, Mantan, Hollywood Cal." The image is and the frame is . The following biography of Moreland is by Gary Brumburgh. "Born just after the turn of the century in Louisiana, Mantan Moreland began running away from home at age 12 to join circuses and medicine shows, only to be brought back time and again. During these times he sharpened his comic skills and developed routines and acts that eventually became popular on the vaudeville stage, or what was then called the "chitlin' circuit." A solo performer by nature, he often teamed up with other famous comics (such as Ben Carter) to keep working, and became a deft performer of "indefinite talk" routines, where two quicksilver comics continually topped each other in mid-sentence, as if reading each other's mind (i.e., "Say, did you see...?" "Saw him just yesterday...didn't look so good"). Moreland's focus gradually shifted his trade toward film, where he initially appeared in servile bits (shoeshine men, porters, waiters). However, his talent for making people laugh couldn't be overlooked and he soon earned featured status in Harlem-styled western parodies and grade "A" comedy films playing the superstitious, ever-terrified manservant running from any kind of impending doom.Moreland's peak in movies came with his recurring role as Birmingham, the skittish chauffeur, in the "Charlie Chan" series, where he was forever forewarning his boss to stay away from an obviously dangerous case or situation. Though haunted mansions were an ideal place for setting off his stereotyped character, Mantan would be haunted in a different way by this Hollywood success in years to follow. By the 1950s, racial attitudes began to change and, with the rise of the civil rights movement, what was once considered hilarious was now interpreted as demeaning and offensive to both blacks and whites. Moreland and others, such as Stepin Fetchit, were ostracized and ridiculed by Hollywood for their past negative portrayals. It took decades for audiences to forgive and newer generations to forget the Depression-era comedy of Mantan Moreland in order for the actor to come back.Mantan Moreland worked Harlem's Apollo Theatre in the 1940's and 1950's with Redd Foxx. He was the featured comedian in the black-cast show "Rhapsody in Rhythm" in 1945. In 1957 he appeared on stage in New York in a black production of Samuel Beckett's "Waiting for Godot" as Estragon (Gogo). Reviewing the production for the New York Times, Brooks Atkinson praised the veteran comic's performance for bringing to the role "a suspicious joyousness of manner, a crack-voiced laugh, a teetry walk, a general feeling that he is the one who is going to be slapped." In 1953 he hosted a short-lived variety show on TV called "Club Mantan" and featured some of the most popular black performers of the time. In 1959, he told a Cleveland newspaper that he would "never play another stereotype, regardless of what Hollywood offers." He added, "The Negro, as a race, has come too far in the last few years for me to dash his hopes, dreams, and accomplishments against a celluloid wall, by making pictures that show him to be a slow-thinking, stupid dolt...Millions of people may have thought that my acting was comical, but I know now that it wasn't always so funny to my own people."In the late 1960s Moreland managed a modest resurgence on TV and in commercials and occasional films, allowing him to work again with such comic heavyweights as Bill Cosby, Godfrey Cambridge and director Carl Reiner. It was all too brief, however, for Moreland, long suffering from ill health, died of a cerebral hemorrhage in 1973, just as he was settling in to his renewed popularity. Today, audiences tend to be kinder and more understanding of Moreland, remembering him as a highly talented comic who broke major barriers and opened the doors for other black actors to follow." ; B&W Photographs; 16mo 6" - 7" tall; 1 pages