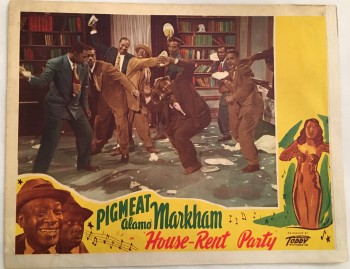 Generally light edge and corner wear but with tape along bottom and right margins. The bottom left corner has had damage that has caused some creasing that is now flattenedOtherwise, some light soiling, aging and wear. Still a rather bright and attractive example with a great main image. This is a lobby card from "House-Rent Party" and all-black-cast movie produced in 1946 by Toddy Pictures and starring Dewey "Pigmeat" Markham. Toddy Pictures Co. was started by Ted Toddy who worked at Columbia. Toddy produced movies for the African-American market and eventually developed a national distribution chain. Pigmeat Markham was an African-American comedian, famous for his "Here com the judge" routine. In the 1960's, his appearances on Laugh-In catapulted him to fame with white as well as black audiences. This lobby card was part of A Cinema Apart, or the Beverly and Larry Richards Collection, which was amassed by Larry Richards over a number of years. A respected historian and a librarian at the Philadelphia Free Library, and author of the book African American Films Through 1959: A Comprehensive, Illustrated Filmography, Mr. Richards was deeply passionate and knowledgeable about African-American culture and history. In 2008, Mr. Richards tragically and suddenly died quite young, leaving behind his collection of hundreds of motion picture posters featuring African-American stars and addressing African-American issues, as well as rare broadsides, window cards, and ephemera. Additionally, he possessed items relating to African-American and slavery history. His collection has been deemed so culturally important that a section of it is now in the collection of the Smithsonian National Museum of African American History and Culture. His wife, Dr. Beverly Richards, now oversees the collection, and has lectured on and exhibited the items both nationally and internationally. ; Color Photographs; Oblong Small 4to 9" - 11" tall; 1 pages