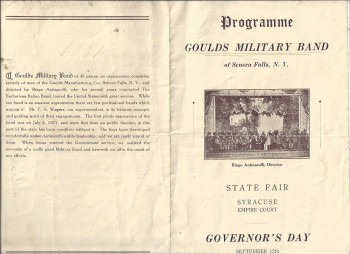 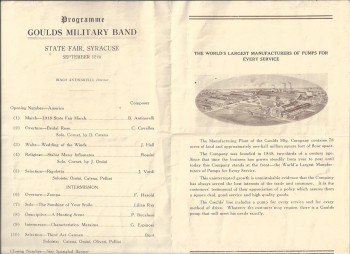 Single-fold, cream program with black titles and B&W photgraph of Goulds Military Band. There is a horizontal crease through the middle and other creasing and wear. Only light edge and corner wear, and while the program has wear, it is still quite presentable. This Programme is for the Goulds Military Band appearance at the New York State Fair in Syracuse on September 12 of, probably 1918 or 1919. Goulds was a pump manufacturing company in Seneca Falls, NY. They formed this band in 1917 which is the only year on the program. Military bands were very popular in the late 19th and early 20th centuries and were highly influential in the development of jazz. ; 8vo 8" - 9" tall; 4 pages