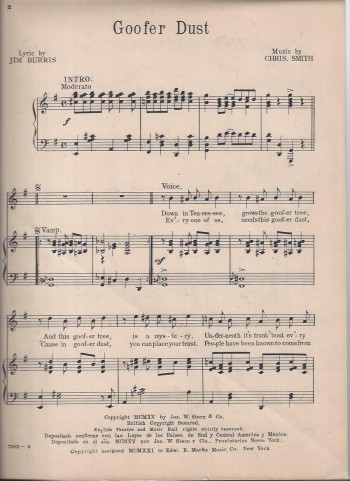 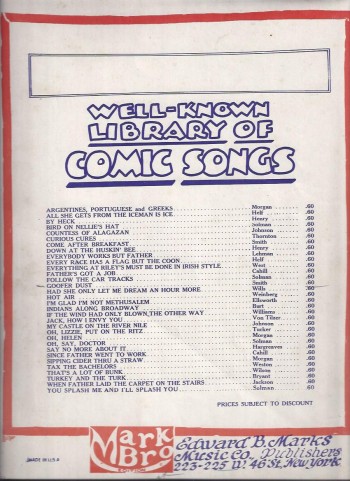 This sheet music for "Goofer Dust" is in a folder titles Well-Known Library of Comic Songs, with a long list of songs under that title. In the past, someone has marked "Goofer Dust" in that list. That song is inside in a four page sheet. The folder has a slit about haldway up the spine fold from the bottom. The actual music has only light wear and aging. Of some interest is the songwriting team of Jim Burris and Chris Smith. They wrote the very popular "Ballin' the Jack." "Goofer Dust" is one of several others they wrote together. Smith, I have found was an African-American musician and I suspect that Burris was also, though I have not found proof of that, other than they both worked for Bert Williams at one tiime. Smith was a very popular lyricist who wrote for and with W. C. Handy and Opal Cooper as well as bert Williams. "Goofer Dust" was written in 1915 and was originally published by Stern. This is a 1921 reprint by Marks. Many of these early African-American musicians who were not blues or jazz players have been overlooked, though their contributuions to American music and culture were of some significance. ; 4to 11" - 13" tall; 8 pages