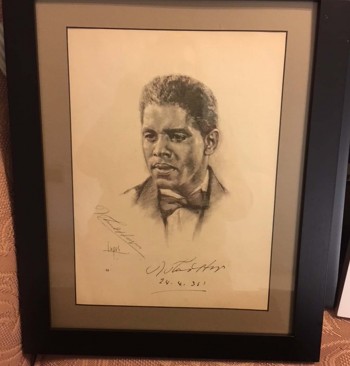 This is an 8 1/2 X 12 autographed print of a drawing of famed African-American tenor, Roland Hayes. It is matted and framed in an 11 X 14 frame. The print comes from the book, Artists in Music of Today, by Helen F. Kaufmann and Eva vB Hansl. The drawing was done by Louis Lupas. The drawing has a facsimile signature of Hayes at an angle to the left. The authentic signature of Hayes is directly under the image and is dated. (The ink in the date has one very small smudge.) Roland Hayes, from Curryville in Northwest Georgia, was an African-American pioneer in singing and recording classical song. He was one of the first African-Americans to sing at Carnegie Hall, and he was the first to record classical music. He also toured Europe, sometimes giving command performances and was something of a mentor to Paul Robeson. Hayes is somewhat overlooked today, but was a major star in the first half of the 20th century. We also have copies of Hayes' autobiography, Amgel Mo and her Son, Roland Hayes, as well as other books by and about Hayes. This framed picture will require extra postage. ; B&W Drawing; Folio 13" - 23" tall; 1 pages; Signed by Author