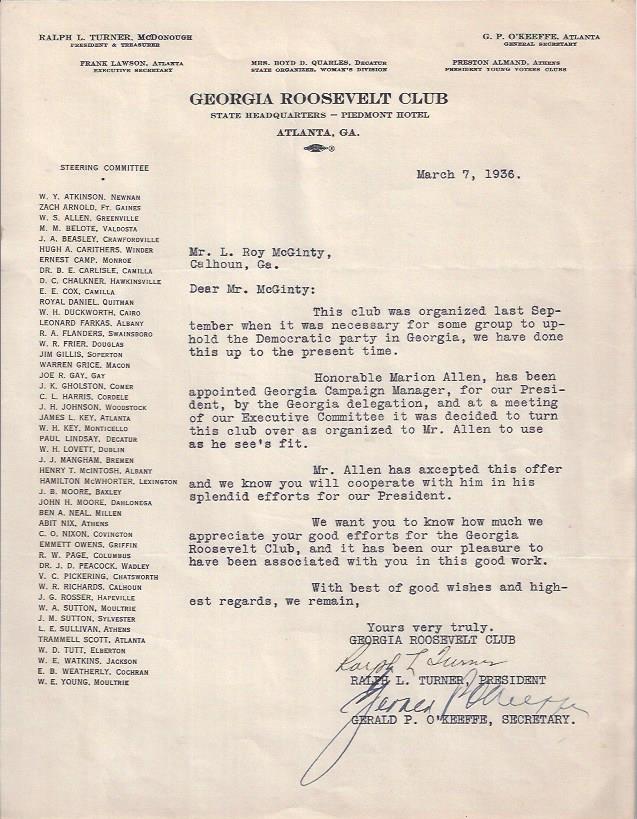 These are two typed letters, both in excellent condition except for normal aging. Both were sent to prominent Georgia newspaper editor, J. Roy McGinty, by Franklin Roosevelt campaign organizations -- the 1932 letter is from the Roosevelt for President, Campaign Headquarters in Atlanta, while the 1936 letter is from the Georgia Roosevelt Club. The 1932 letter is one of appreciation to Mr. McGinty for his efforts for Roosevelt during the Presidential Campaign. It is signed by W. E. Page, Personal Representative for Governor Roosevelt. The 1936 letter informs Mr. McGinty of the appointment of Marion Allen as the new Campaign Manager of Georgia for FDR and that the Georgia Roosevelt Club has been turned over to him. Mr. McGinty is encouraged to continue to work for the President. The letter is signed by Ralph Turner and Gerald O'Keeffe. J. Roy McGinty was longtime Editor of the Calhoun Times, a Georgia State Senator and President of the Georgia Press Association. He is one of the subject in the Dictionary of Georgia Biography (UGA Press, 1983). Interesting Georgia political documents related to Franklin Roosevelt. ; Small 4to 9" - 11" tall; 2 pages; Signed by Associated