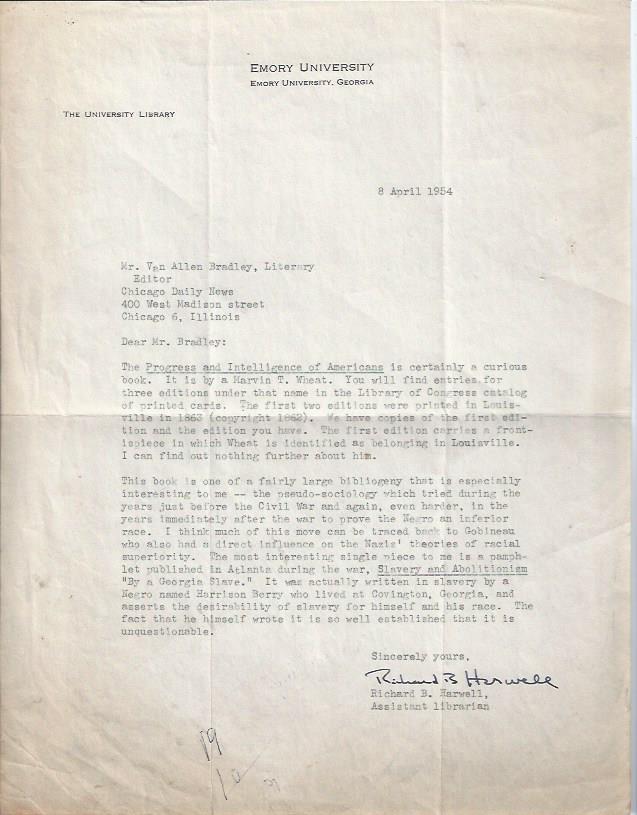 Autographed Letter to Van Allen Bradley concerning Progress and Intelligence of Americans by Marvin T. Wheat and Slavery and Abilitionism by "A Georgia Slave" (Harrison Berry)

This is a typed letter on Emory University stationery from Richard Barksdale Harwell to Van Allen Bradley, Literary Editor of the Chicago Daily News. The letter is in VG or better condition except for aging, folding creases for mailing and some extraneous marks and numbers in the bottom margin not afecting text. Harwell was a Georgia librarian and bibliographer, most known for Georgiana: A Selection of a Dozen Dozen Collectible Georgia Books, an annotated work on important Georgia books that he co-authored with Robert Marion Willingham, Jr. and which has become a standard reference work for many Georgia book collectors. This letter deals with two books. The first, Progress and Intelligence of Americans by Marvin T. Wheat, concerns some bibliographic questions and discusses Wheat's book as an example of the "pseudo-sociology" in the South to show that African-Americans were an inferior race. Harwell traces this idea to Goblineau and shows a connection to Nazi theories of racial superiority. Harwell also discusses briefly Slavery and Abolitionism by "A Georgia Slave" (Harrison Berry), who, though a slave himself, argued that slavery was the best position for African-Americans. Harwell notes that Berry wrote this essay while a slave and that his authorship is undisputed. Interesting letter that certainly resonates with recent events. (It should be noted that after the Civil War, Berry continued to write and asserted the equality of Blacks with all other races and predicted the violent prejudice that would emerge in the South.) ; Small 4to 9" - 11" tall; 1 pages; Signed by Author

Autographed Letter to Van Allen Bradley concerning Progress and Intelligence of Americans by Marvin T. Wheat and Slavery and Abilitionism by "A Georgia Slave" (Harrison Berry)