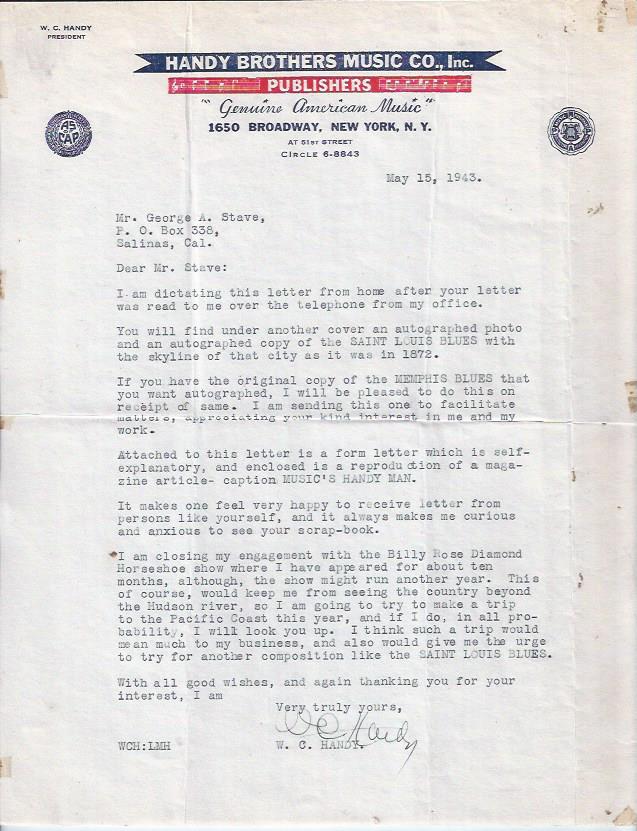 W.C. Handy (1873-1958) brought blues music to the fore of American Music from its modest regional roots. Considered one of the most influential songwriters with a stunning number of classic compositions to his credit not the least being "Saint Louis Blues" and "Memphis Blues". Later in his career he authored four books on African-American composers and music history. His funeral was attended by thousands in Harlem and over a hundred thousand mourners lined the streets in the Bronx to his grave site. Offered is a typed letter signed 11 x 8½" on Handy Brothers Music Co., Inc letterhead dated 1943 to a gentleman and ardent fan in Salinas, California regarding the signing of "Saint Louis Blues" photo and original recording of "Memphis Blues". Handy's generous spirit and kindness to the extent of contacting the fan if visiting the West Coast is apparent and altogether lovely. In very good condition with intersecting folds, tape remnants to edges with slight evidence of toning, soiling and handling.; 4to 11" - 13" tall; 1 pages