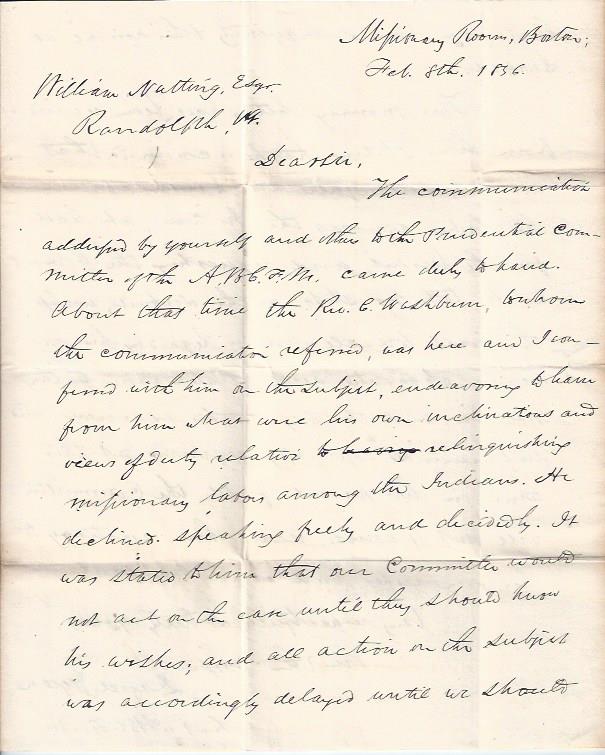 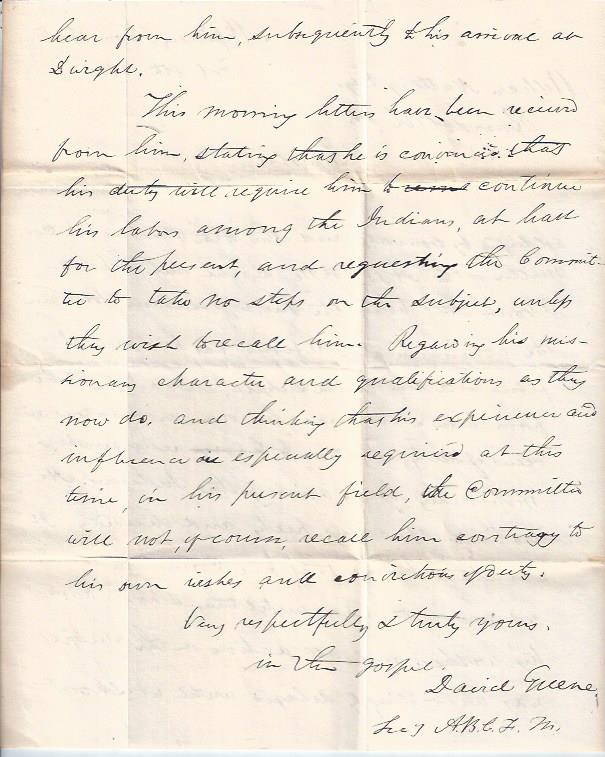 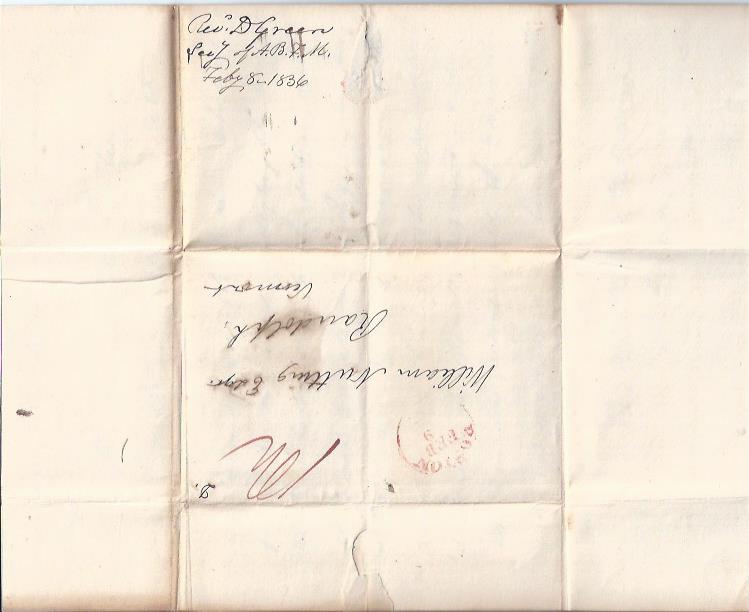 Autograph Letter Signed by Rev. David Greene as Secretary, American Board of Commissioners for Foreign Missions. Missionary Rooms, Boston, Feb. 8, 1836. 2pp.+stampless address leaf. To William Nutting. Randolph, Vermont. Light wear and fold lines. Two holes and light staining on address leaf. Overall very good condition."the Rev. C. Washburnwas here and I conferred with himendeavoring to have from him what were his own inclinations and views of duty relative to relinquishing missionary labors among the Indians. He declined, speaking freely and decidedlyall action on the subject was accordingly delayed until we should hear from him, subsequently to his arrival at Dwight. This morning letters have been received from him stating that he is convinced that his duty will require him to continue his labors among the Indians...Regarding his missionary character and qualifications as they now do, and thinking that his experience and influence are especially required at this time in his present field, the Committee will notrecall him contrary to his own wishes and convictions of dutyCephas Washburn (17931860) was a famed Presbyterian missionary , called The Apostle to the Cherokees who worked with Native Americans of the southeastern United States, before and after their forced removal from their lands by US Government dictate. Born in Vermont, Washburn went to live among the Cherokee at the Brainard Mission near Chattanooga, Tennessee soon after becoming an ordained minister.In 1819 he accompanaied the first Indians who voluntarily moved from Tennessee to Arkansas, where Washburn established the Dwight Mission (named for the President of Yale), the first American Christian Mission to the Indians west of the Mississippi. When the Cherokee were later forced to move further westward, many dying en route along the infamous Trail of Tears, Washburn migrated along with them to eastern Oklahoma, where he reestablished the Dwight Mission in Sallisaw. In this letter, it was on the eve of that Indian Removal that Vermont friends of Washburns tried to persuade his Presbyterian sponsors to transfer him to a less perilous duty. But Washburn persevered, remaining with his Cherokee friends until 1850, despite his failed attempt to establish a college where white and Indian students could be educated together. He died just before the start of the Civil War.; Large 8vo 9" - 10" tall; 4 pages