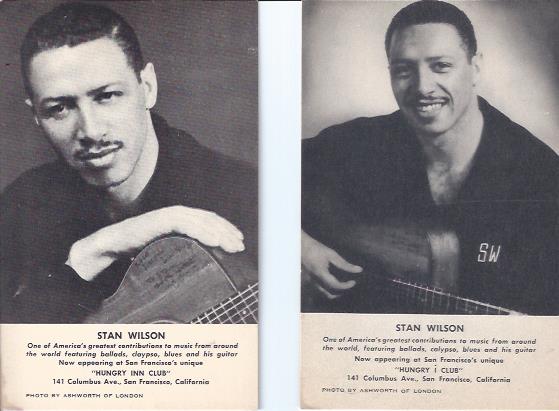 Only very light aging and general wear. Two postcards from the famed hungry i club in San Francisco. Both cards feature folksinger Stan Wilson, who was the first performer at the hungry i in 1952 and soon after that appearance became the feature singer six nights a week. Wilson also influenced the Kingston Trio and probably turned down an opportunity to join the group. With The Weavers, The Gateway Singers and Josh White, Wilson is credited with the folk music renaissance that began in the 1950's. He wrote "Jane, Jane, Jane" and "Rolling Stone" for The Kingston Trio. The hungry i in North Beach was one of the first and pre-eminent clubs fo the burgeoning folk scene. Quite uncommon folk, California, and African-American ephemera. ; B&W Photographs; 32mo 4" - 5" tall; 2 pages