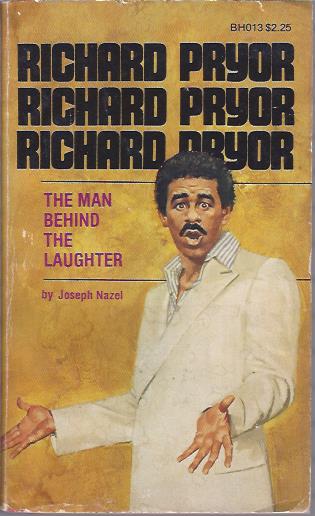 Some, general wear and aging with a vertical crease down the spine and an old stain and an old dampstain of some sort along the rear spine edge. This stain does not seem to have affected the interior. Interior pages have some toning but that is true of almost all Holloway House books. Book is still square. Red X remainder mark on bottom foredge. #BH-013. This was an unauthorized biography of Pryor. The suthor, Joseph Nazel, was an African-American writer and editor at Holloway House. After Iceberg Slim and Donald Goines, he was probably Holloway House's most popular writer. Holloway House first editions are notoriously tricky to identify. Most titles were republished many times. In titles from the 60's and 70's, the statement "First Printing" can occur in later printings as well as the first. True first printings are rather scarce and condition is often an issue. Holloway House began in the 1960's. It was the first publisher to capitalize on the urban black market. Besides Donald Goines, Holloway House published Iceberg Slim, Joseph Nazel, Robert DeCoy and many other African-American writers. Wanda Coleman, now called the "Poet Laureate of Los Angeles," was an early editor. The company is still in operation.; 16mo 6" - 7" tall; 205 +ads pages