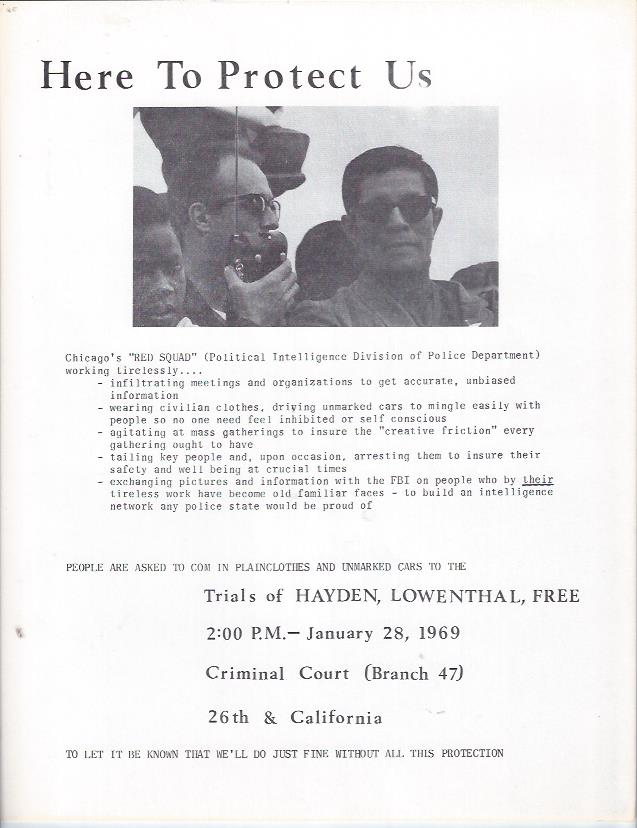 ORIGINAL--NOTA?REPRODUCTION. Near Fine. Stored flat for 40 years: Clean, one small curl on bottom left corner, tears.Some age discoloration at the edges.8.5 x 11 handbill from 1969, printed black on white stock, promotes upcoming trial of Tom Hayden and Wolfe Lowenthal to be held at Chicago’s notorious south side Criminal Courts building at 26th and California. Hayden and Wolfe had been arrested during the 1968 Chicago Democratic Convention “Festival of Life” events in Chicago’s Lincoln Park for “Obstructing Justice” after they allegedly let the air out of the tire of a police car. Flyer details the tactics used by the Chicago Police Red Squad unit which arrested Hayden and Lowenthal. The Red Squad was an elite Chicago Police unit whose mission was to spy on Anti-War protesters and others who they deemed “Subversive.” Hayden, now a California state senator and ex-husband of actress Jane Fonda, was a co-founder of the Students for a Democratic Society (SDS), and was an alleged member and co-conspirator (along with Abbie Hoffman, Jerry Rubin, Dave Dellinger, Bobby Seale and others) of the so-called “Chicago Eight” (later the “Chicago Seven,” after Seale’s removal for separate trial) of Chicago Conspiracy Trial fame. ; B&W Photograph; Small 4to 9" - 11" tall; 1 pages