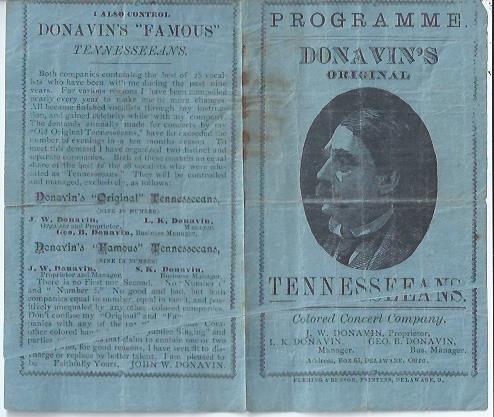 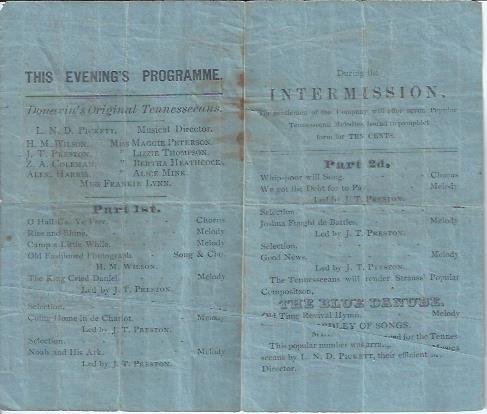 Single fold blue paper with black titles and engrave portrait of Donavin. Varied edge, corner and surface wear including an old horizontal crease. There is also an original printing flaw that produced a diaganol line acoss the bottom third of the program. ; B&W Illustrations; 24mo 5" - 6" tall; 4 pages; This program is not dated, but based on the performers it appears to be from 1882. One of the few troupes of Black minstrels that was popular after the Civil War, when American minstrelsy would continue to be dominated by white singers in blackface. Program lists the nine members of the company, 4 men and five women, under the direction of L. N. D. Pickett (a undeservedly forgotten African-American composer at Wilberforce University). The group sang a dozen songs, only one of which was a famous slave-era hymn. The rear cover notes the group was “controlled” by white entrepreneur John W. Donavin since 1873, originally called “Slave Cabin Singers”, but softened to “Colored Concert Company” by the 1880s. This fragile imprint is more rare than the group’s earlier programs, WorldCat showing only one institutional holding, at the University of Mississippi. The group, or at least the management, was base in Delaware, Ohio.