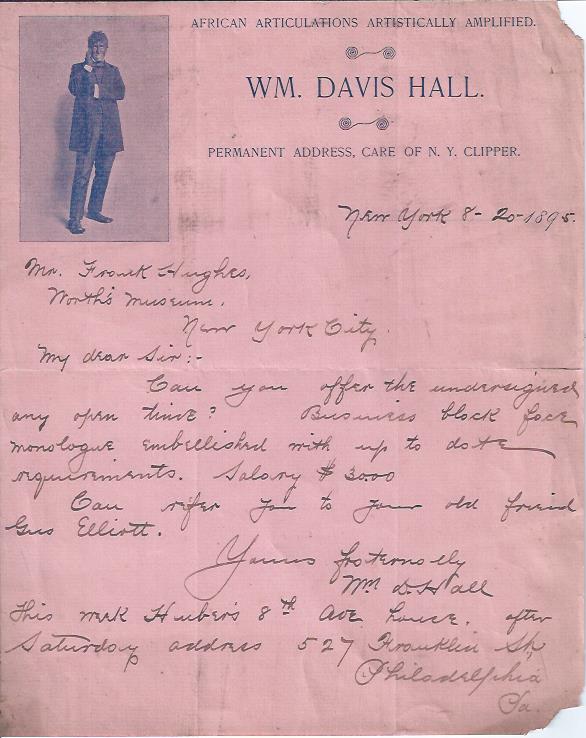 Pink business stationery with titles in black and photograph of Hall in black-face. Both right corners are torn and there is some light soiling. Otherwise, the letter is in remarkable shape, clear and easily readable. ; B&W Photographs; Large 8vo 9" - 10" tall; 1 pages; Minstrelsy and comedy in black-face was one of he most popular forms of entertainment in the late 19th century. This tradition carried on into the middle of the 20th century. The influence and popularity of such performers, both black and white, is often overlooked today. William Davis Hall was a white entertainer who performed in black-face, both solo and within larger groups. He adverises his act as "African Articulations Artistically Amplified." Such a performance suggest arch racism but was done by many black performers, in black-face, as well. Hall's letter is the the Worth Museum in New York, looking for a gig. Of some interest is the fact that the Worth Museum was the venue for the first "A'' Star Stock Company" organized by African-Americans, under the direction of Bob Cole, later vaudeville partner of James Weldon Johnson's brother, Rosamond, and co-composer, with Johnson, of the 1902 hit song, Under the Bamboo Tree. Worth's seems to have been a theater that often featured African-American-based acts.