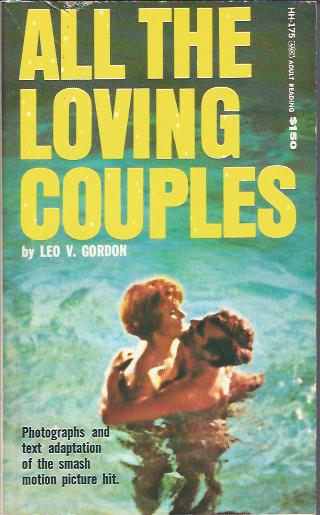 All the Loving Couples

Pictorial wraps (color scene from movie) with light edge and corner wear. Book is basically as new with shelf wear on the edges. Spine is straight and neither cracked nor creased. Book is unread. Paper is higher quality than the usual Holloway House book and is not toned. VG+ to NF. ; B&W Stills from Movie; 16mo 6" - 7" tall; 253 pages; This is a novel, based on a sexploitation movie from 1969. It has many stills from the movies with some nudity. Leo V. Gordon was an actor and scriptwriter who did both this book and the script. Roger Ebert actually reviewed this movie and exhibited some ambivalence about it, indicating that It was a cut above the normal films of the type. Holloway House was selling sex and seems to have planned a series of movie tie-ins. This is not a stated First Edition, but it is the correct number HH-175, the correct year, and has an SBN number rather than and ISBN number -- SBN was used in the US prior to 1970.

Title: All the Loving Couples

All the Loving Couples