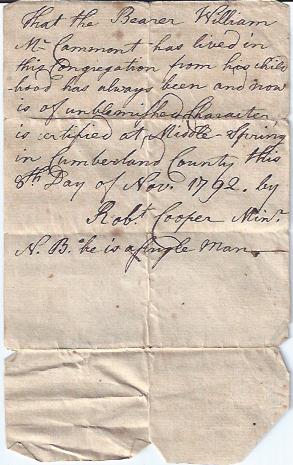 Autograph of Rev. Robert Cooper on Note of Recommendation for Wm McCammont

Written on hand-laid paper (chain lines visible) with an internal date of 1792. Vertical and horizontal creases indicate that McCammont carried this in some sort of bill case. Edge wear but mostly at bottom away from text. Quite readable and still in good shape becauese of the quality of the paper. ; 24mo 5" - 6" tall; 1 pages; This note of recommendation or reference reads: "That the Bearer William McCammont has lived in this congregation from his childhood has always been and now is of unblemished character, is certified at Middle Spring in Cumberland County this 8th Day of Nov. 1792. By Robt. Cooper Min. N. B. He is a single man." Middle Spring Presbyterian Church was built in Cumberland County, Pennsylvania in 1738 though preaching had taken place at the site at least two years earlier. At the time the church was on the frontier between white settlements and Indian land. Robert Cooper was the third minister at Middle Spring beginning his pastorate in 1765, ending it in 1797. William McCammont came from a well-known family in the area and may have served under Washington in the American Revolution. Whether this note recommends McCammont as a minister or just as a man is open to interpretation. Little seems to be known about him though many of his family members and descendants are of some note in the Cumberland County area. This note may have originally come from a day book or diary that I also have on-line. The paper here is the same as that in the day-book, though the entries in that book are all from a Southern family, 1819 and later. However, the book did change hands and it is possible that this letter originally came from it, since the two items were together when I acquired them.

Title: Autograph of Rev. Robert Cooper on Note of Recommendation for Wm McCammont

Autograph of Rev. Robert Cooper on Note of Recommendation for Wm McCammont