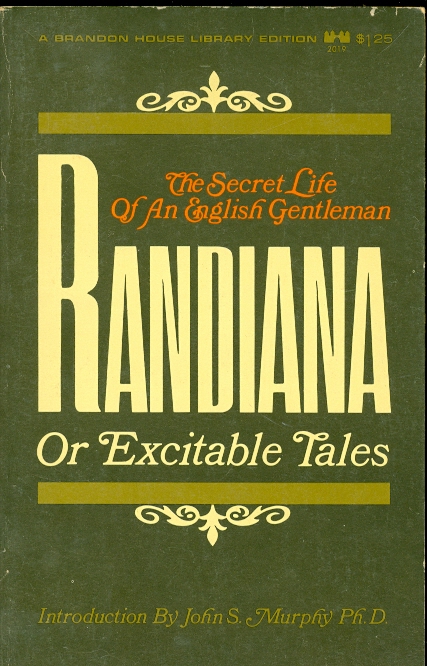 Randiana or Excitable Tales The Secret Life of an English Gentleman

Olive green wraps with lettering in yellow and orange. Book has light edge and corner wear but is square with an uncracked spine. One superficial crease on spine, but book appears unread. ; 16mo 6" - 7" tall; 150 pages; Introduction by John S. Murphy, Ph. D. Brandon House was one of several major publishers of so-called "sleaze" in the US during the late 1960's after the Supreme Court issued its ruling that allowed books with "socially redeeming" content to be published. (That's why so many of these paperbacks have an Intro by someone with a Ph. D. ) This is a reprint of a bit of Victorian erotica showing the underground of that era.

Title: Randiana or Excitable Tales The Secret Life of an English Gentleman

Randiana or Excitable Tales The Secret Life of an English Gentleman