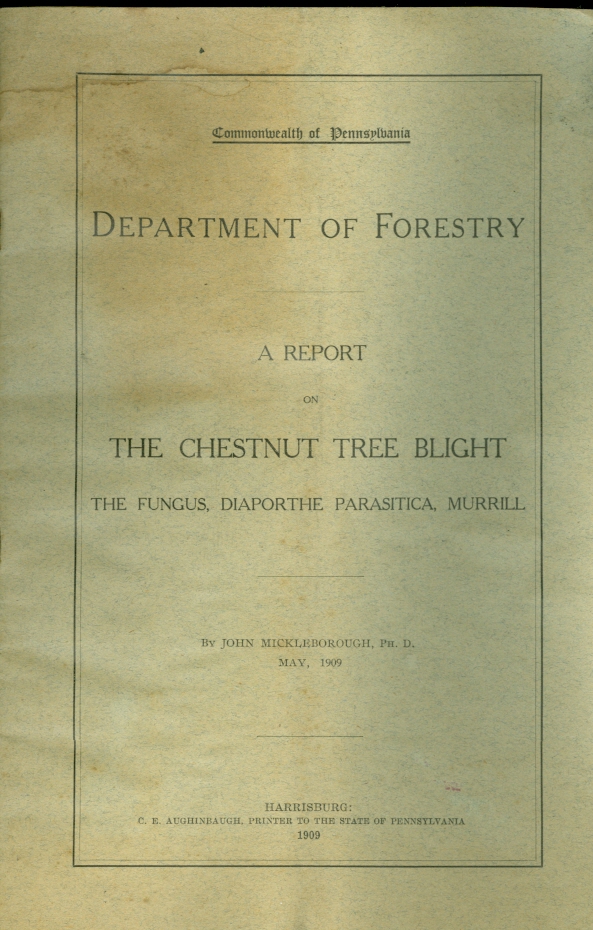 A Report on the Chestnut Tree Blight The Fungus, Diaporthe Parasitica, Murrill

This booklet is a bit tricky to describe. The stapled binding is square and secure. There is very little wear on the corners and edges. However, there is an old stain of some sort on the top left quareter (see scan) , and an old vertical crease through the center where someone probably folded the booklet while carrying it. This crease has flattened out to a great extent. The interior pages are all clear and easily readable but there is waviness and very light evidence of an old dampstain. The waviness is evident; the stain not so much. All in all, the booklet is G+ to VG-. ; Commonwealth of Pennsylvania, Department of Forestry; B&W Illustrations; Large 8vo 9" - 10" tall; 16 pages; This booklet reports on the terrible chestnut blight in the US in the early part of the 20th century. Chestnuts were one of the predominant trees in the Appalachians, and this blight eventually wiped them out. The blight was a natural disaster and an economic disaster for people in the mountains who, in many cases, depended on both income and material from the trees. This booklet was written before the blight had spread throughout the mountains of Pennsylvania and so it is relatively early in the story of the disaster, written at a time when many people thought that the disease might be controlled. This 16-page booklet is a small piece and important piece of American history discussing the beginnings of a monumental disaster of which most people today have no knowledge.

Title: A Report on the Chestnut Tree Blight The Fungus, Diaporthe Parasitica, Murrill

A Report on the Chestnut Tree Blight The Fungus, Diaporthe Parasitica, Murrill