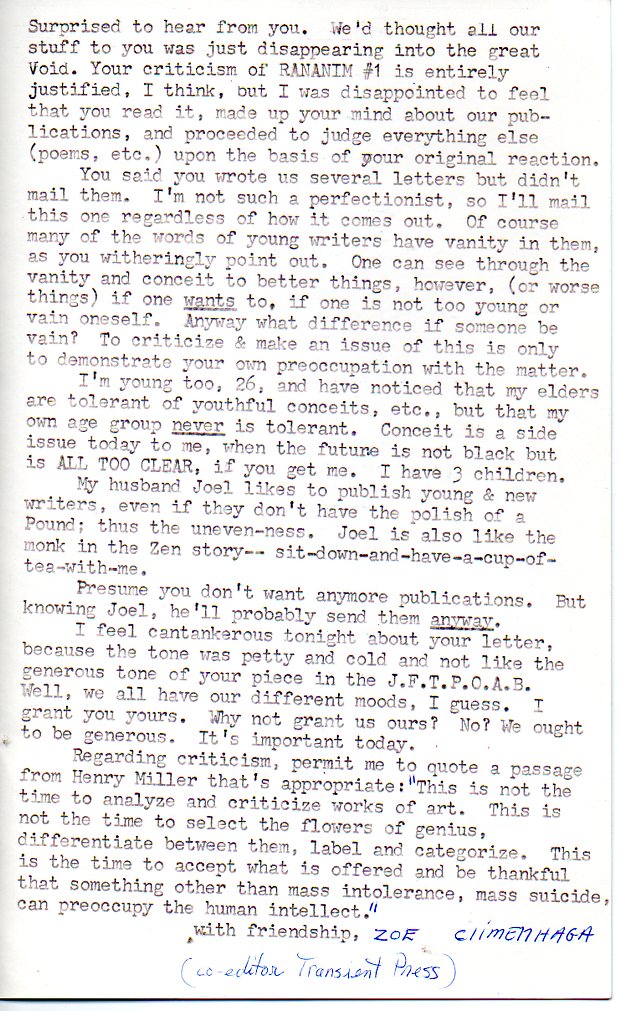 Letter to David Meltzer of City Lights Books, Typed on Kenneth Patchen Card with Poem and Drawing by Patchen

Light wear from handling. Periods typed on the folded card have left small indented dots on both front and back of the card. Joel and Zoe Climenhaga, according to Miriam Patchen "Knew Kenneth Patchen's work better than anyone". In 1961 they originated TRANSIENT PRESS, when they published the first issue of Seed, a poetry magazine, under its imprint. Zoe Clinenhaga was its Co-Editor. During the greater part of the 1960's, other magazines (Jacaranda, Ferment, Rananim and Open Letter) were published through Transient Press. Later, during the 1970's and 1980's, other ephemeral poetry magazines and literary journals were published on an irregular basis under the editorship of the Climenhagas, these included Awakening, The Back Shelf Dispatch, Below Ground Level, Counsel for the Offense, Foundation, Greenage, Inner Dimension, Jonah's Gourd, Lighthouse in the Coming Storm, Noah and a variety of others. This letter was written to David Meltzer by Zoe complaining about his critique of material that Joel had sent him to read. Meltzer, an American poet and musician of the Beat Generation and San Francisco Renaissance, came to prominence with inclusion of his work in the anthology The New American Poetry 1945-1960. The note is typed on a single fold, 8 by 5" card published by Patchen Cards, with a poem and drawing by Patchen on it. This is an interesting little piece of Beat ephemera. ; Letters; B&W Drawing; Thin 8vo 8" to 9" tall; Signed by Author

Title: Letter to David Meltzer of City Lights Books, Typed on Kenneth Patchen Card with Poem and Drawing by Patchen

Letter to David Meltzer of City Lights Books, Typed on Kenneth Patchen Card with Poem and Drawing by Patchen