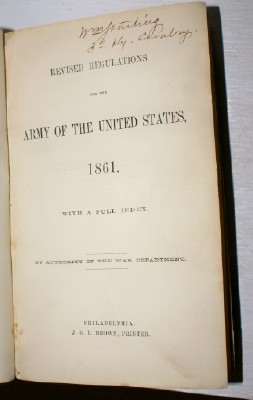 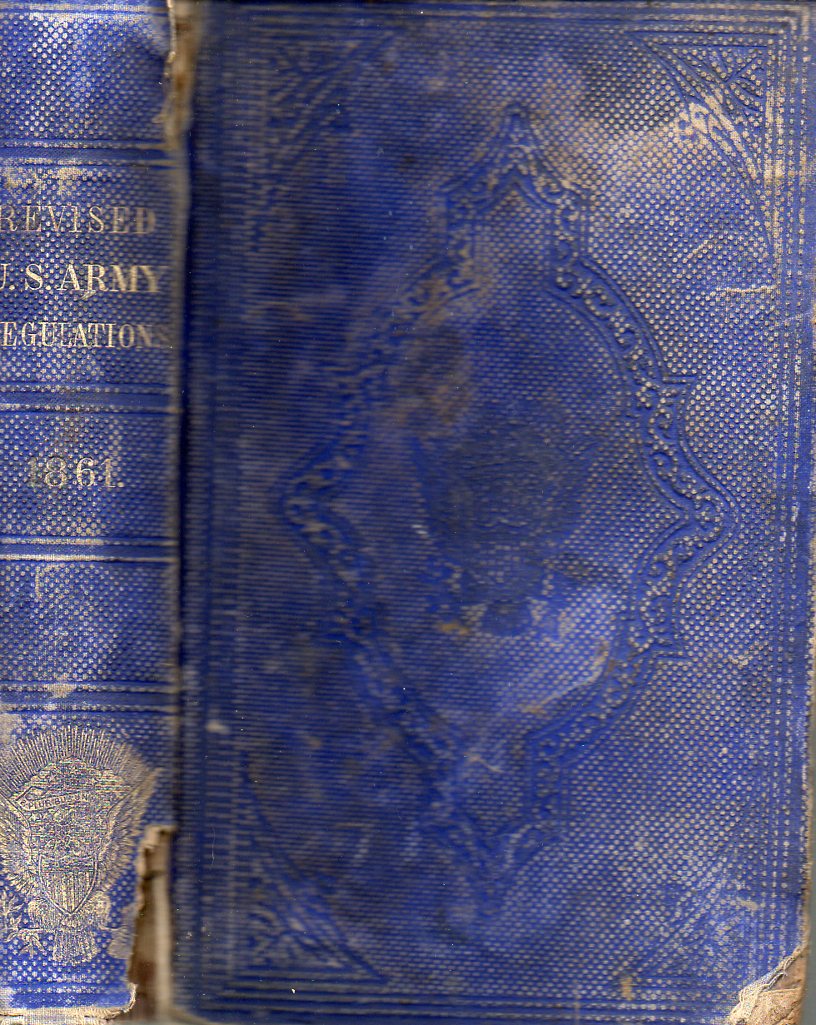 Revised Regulations for the Army of the United States, 1861 By Authority of the War Department

The boards are very worn, with corners bumped and the cloth pulled loose at the cornrs. The spineis missing a chip at the bottom, 1 1/2" by 1/4" and has a split at the top. The blue boards are blind stamped with what may be the Great Seal of the US. The gilt is rubbed and it's hard to see the insignia. The interior is clean, with very litttle toning or foxing, though the fore edges are soiled and uneven. ; 8vo 8" - 9" tall; 559 pages; The book is signed 3 times by the former owner, William Starling, a 1st Lieutenant in Company G of the 3rd Kentucky Cavalry Regiment. Below is some information on the Kentucky Cavalry. “The 3rd Kentucky Cavalry was raised in September of 1861 at the call of James S. Jackson, a unionist from Hopkinsville, Kentucky. The men came principally from the counties of the Green river region and Christian county. The 3rd Cavalry was quickly in action with fledgling Confederate cavalry also being formed in that part of the state. In October they were engaged at Woodbury and Brownsville, Kentucky. On December 31st, 1861 the 3rd Kentucky Cavalry was mustered in the service of the United States at Calhoun, Kentucky. Three days prior to mustering in, a part of the 3rd Cavalry under command of eighteen year old Maj E. H. Murray and consisting of 168 men, was attacked while on a scout by Confederate forces under Col. Nathan Bedford Forrest who outnumbered him almost two to one. The fight was fierce and Murray, badly outnumbered, suffered casualties. Capt. Bacon was killed and Capt. Davis captured. In addition, eight troopers were killed and many wounded. Forrest also lost a Capt. Meriwether, three troopers killed and several wounded which he took to Hopkinsville. Youn Murray's conduct received the praise of General Crittenden. The regiment remained in Western Kentucky during the winter fighting Confederate raiders from Hopkinsville and other points. The 3rd advanced into Tennessee along with the rest of the Union army and proceeded to Nashville. It accompanied Buell to Pittsburg Landing and participated in the second day's fighting at the Battle of Shiloh. Afterward, the 3rd continued in Crittenden's division, Buell's army, in the movements on Corinth and Iuka, Mississippi. Jackson was raised to command of Buell's entire cavalry force and promoted to brigadier general. When Buell returned to Kentucky in response to Confederate General Bragg's movement into the border state, the 3rd Cavlary went as well, to the Battle of Perryville. On their way there, the 3rd helped to envelope and capture the 3rd Georgia Cavalry Regiment at New Haven, Kentucky. It was at Perryville that their former commander, Brigadier General James S. Jackson was killed. After Perryville the 3rd moved south to Nashville and became a part of General Rosecran's army. In December of 1862 the 3rd was in severe combat at Franklin and again at Wildcat creek in Tennessee. In the Battle of Stone's River the 3rd gave a good account of itself. By this time, young Murray had been advanced to full colonel of the regiment. A dispatch from the fight at Murfreesboro mentioned Murray stating: ‘Col. Murray, with a handful of men, performed service that would do honor to a full regiment. ’ The 3rd Cavalry, with other Kentucky regiments, was sent back to Kentucky for refitting. While there, the 3rd was stationed at Hopkinsville and Russellville, engaging Confederate partisans throughout the winter. Later in the spring, a battalion of the 3rd, under command of Maj. Lewis Wolfley, participated in the capture of Col. John Hunt Morgan, the famous rebel raider. In December of 1863 the 3rd played an important part in driving Forrest from West Tennessee. The 3rd then took part in the Atlanta campaign, riding completly around the city and the rebel army. After the surrender of that city to Major General William Thomas Ward, a fellow Kentuckian and division commander under Sherman, the 3rd fought skirmishes almost without number with General John Bell Hood's army all during the month of October 1864. They then prepared to march to the sea with Sherman. On this famous campaign the 3rd fought battles at Blackville, S. C. , Lancaster, Taylor's Crossroads, and Fayetteville. In North Carolina they were engaged at Mount Olive. In April of 1865 near Lexington, N. C. The 3rd was mustered out of service, the officers and men having proved themselves everywhere worthy of their first brilliant and heroic leader, James S. Jackson. ” -- www2.okstate.edu/wcross/reghistory

Title: Revised Regulations for the Army of the United States, 1861 By Authority of the War Department

Revised Regulations for the Army of the United States, 1861 By Authority of the War Department