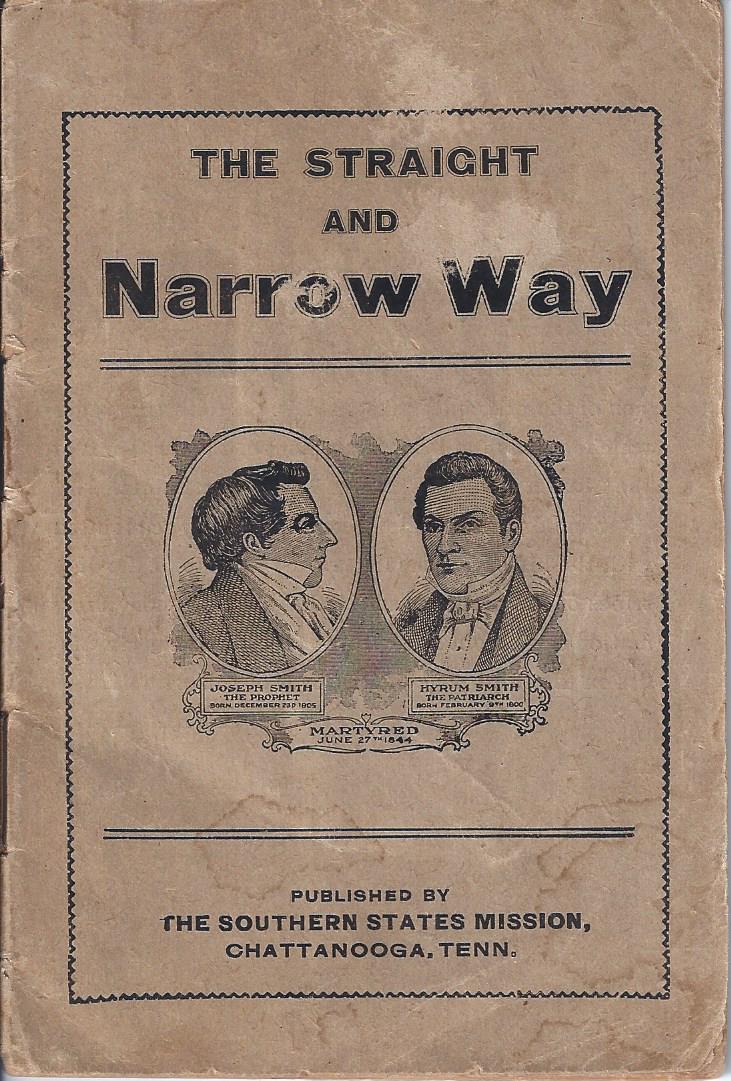 The Straight and Narrow Way : Doctrines the Savior Taught

Stapled, toned, cream wraps with black titles and images of Joseph Smith and Hyrum Smith with the word "Martyred" in a frame beneath their images. Light edge and corner wear, a dime-sized stain on rear wrap and a short (1/2") slit at bottom of spine edge, but overall in remarkably nice condition. This is a rare pamphlet produced by the Southern States Mission of the Church of the Latter Day Saints (Mormons) from their Mission House in Chattanooga, Tennessee. Since the author, Ephraim Nye, died 10 months after assuming his post in Chattanooga, and since only when he became Mission President could he publish tracts like this for his travelling missionaries to sell to converts or those interested, it is likely that the pamphlet comes from 1902. 19th and early 20th century LDS mission material from the Southern states, particularly Tennessee and Georgia, is quite scarce and this subject has not received much study. The Southern States Mission was founded in 1875 in Nashville. From there it moved to Rome, Georgia and finally, because of violence in Georgia resulting in the murder of Missionary Joseph Standing and the fact that Chattanooga offered better and cheaper railroad service, the Mission was established in Chattanooga This headquarters was located in dedicated buildings, usually a home converted for such use. Two known locations in Chattanooga were homes on Cameron Hill (long gone) and at 711 Fairview Avenue. From the headquarters, LDS material was prepared and sold to individual missionaries who were sent to various Conferences (16 in Georgia and a similar number in East Tennessee). These missionaries worked in pairs and sold pamphlets like "The Straight and Narrow Way" to converts and others who were interested. Because such material was costly both to missionaries and to those who bought them only limited numbers were printed. WorldCat locates only one copy of the Chattanooga imprint of this pamphlet at Brigham Young University. There are only seven other extant copies of the pamphlet, all printed in other cities.; B&W Drawing, Cover Art; 24mo 5" - 6" tall; 32 pages

Title: The Straight and Narrow Way : Doctrines the Savior Taught

The Straight and Narrow Way : Doctrines the Savior Taught