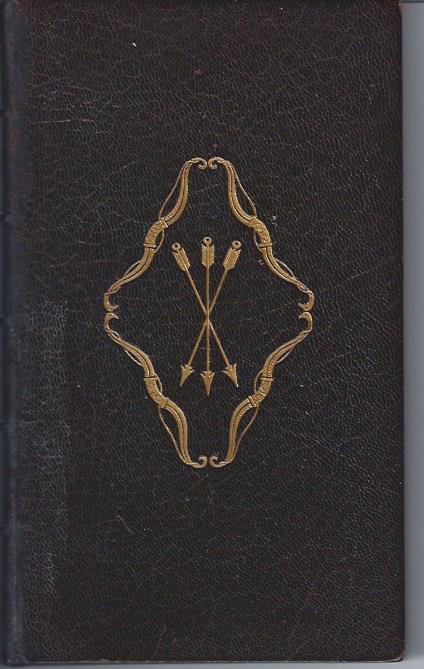 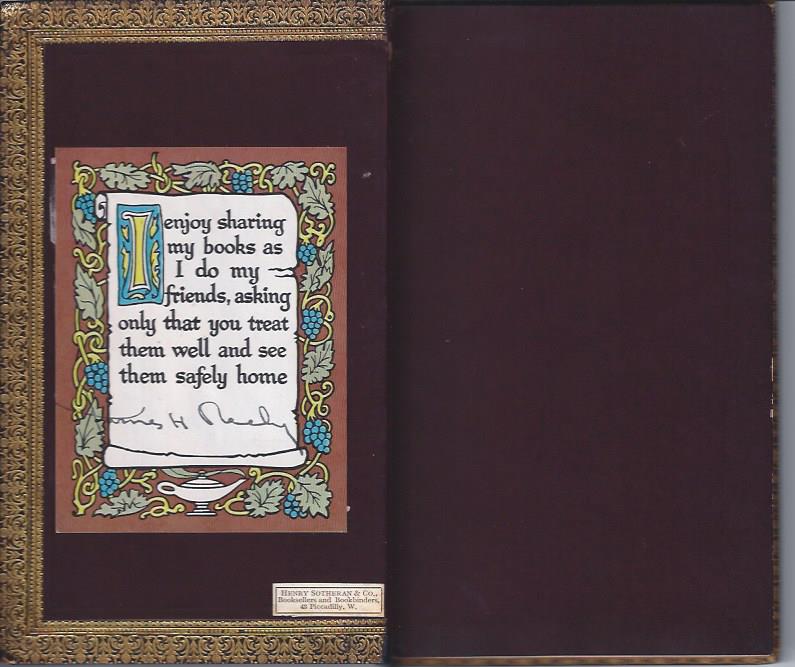 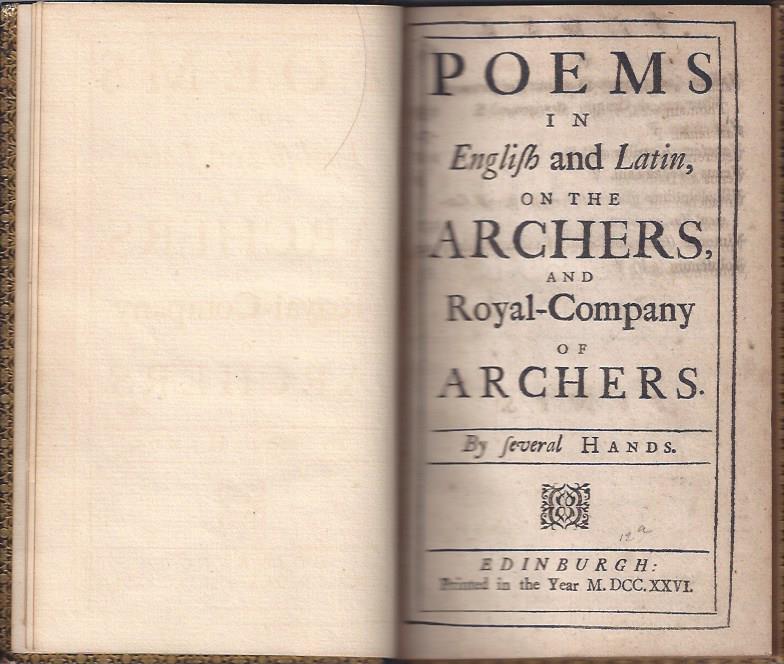 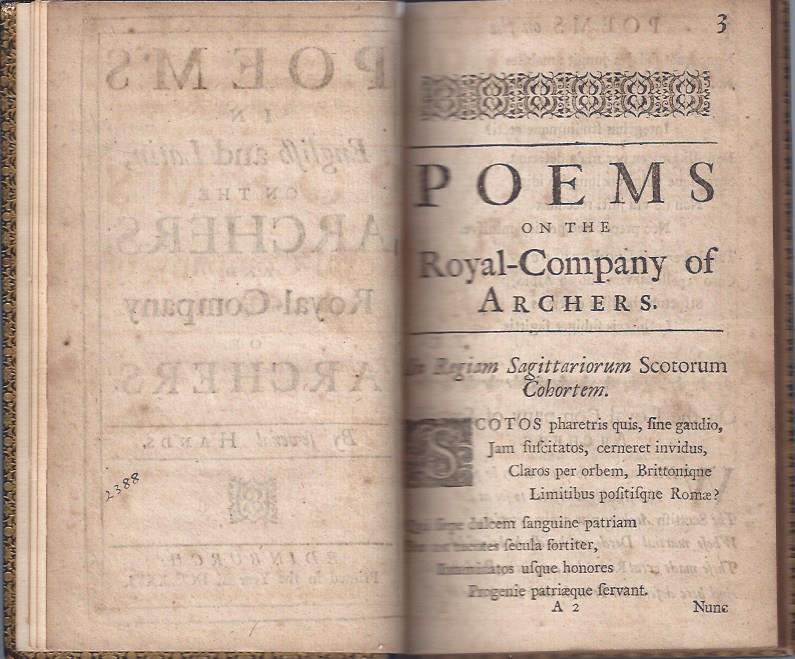 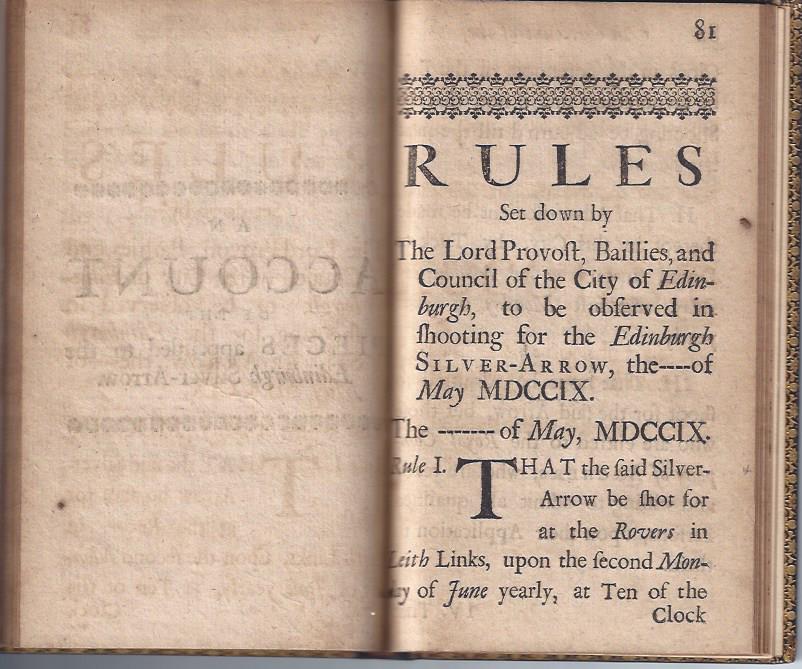 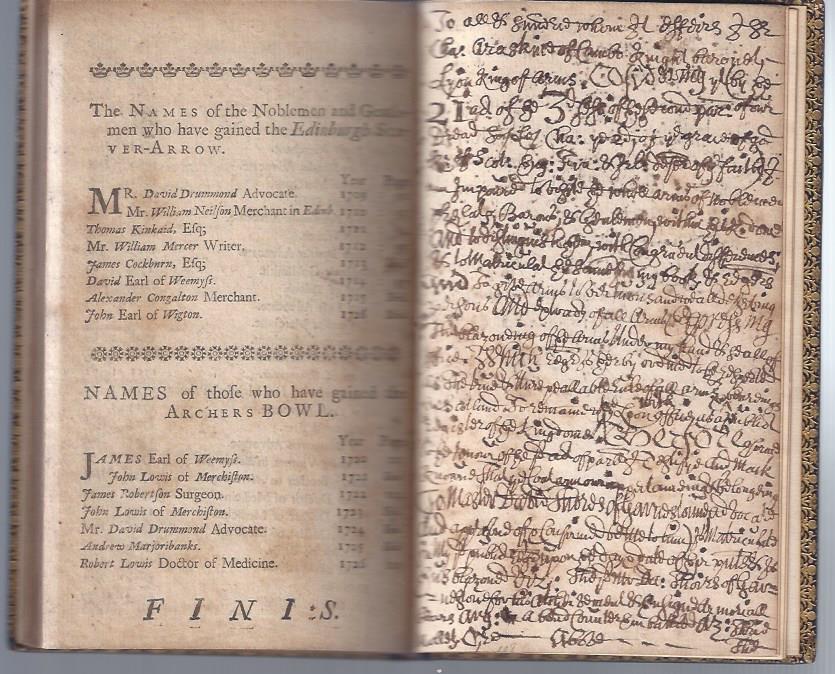 Full leather binding, raised bands on spine, gilt edges and 3 arow and shield device on both front and back. Front and back pastedowns have gilt edging. There has been some little repair: Japanese paper hinges were added on the outside of the hinges to stabilize the leather that was cracking. The paper is toned with occasional foxing, and some edges. There is a label on the front pastedown, Henry Sotheran & Co. Booksellers and Bookbinders, 43 Picadilly, W. The binding may have been done by them. On the back free endpaper is a date stamp, November 29, 1916 and the penciled notation Sotheran. There is a former owner's bookplate on the front pastedown with the name James H. Neely. Overall a most attractive volume. Poems in English and Latin on the Archers and Royal-Company of ArchersThe book contains poems in English and Latin by various authors, some seem to be dedicated to member of the Company. There are also accounts of some of the prizes awarded by the company: the Musselburgh Arrow, the Edinburgh Arrow and the Silver Bowl, along with lists of the winners through 1726. The last two pages are curious - they are covered with script by many different writers, some of it overlapping. (see scan) Wikipedia provides some information about the Company: "The Royal Company of Archers is a ceremonial unit that serves as the Sovereign's Bodyguard in Scotland, a role it has performed since 1822 and the reign of King George IV, when the company provided a personal bodyguard to the King on his visit to Scotland. It is currently known as the Queen's Bodyguard For Scotland, and is located at Edinburgh. The Royal Company of Archers has a long history in Scotland as a body that celebrated both the recreation and talent of local archers. As a royally-established body, the company has a long history of unique prizes, powerful supporters, and ceremonial powers. The Company's traditions relate to its reason for formation, the archery competition. To further this, it offers thirteen prizes that were at some time in the past competed for annually. Many are retained to the present day. The Musselburgh Arrow- The tradition of shooting the silver Musselburgh Arrow pre-dates the creation of the company to that, known as the small arrow presented by the town of Musselburgh in 1603, and follows in the traditions of other burghs of Scotland. A new, large, arrow was presented in 1713. The victor of the shooting retains the arrow for a year, and on handing it over to the next victor appends a medal to the arrow with an engraved personal motto, all of which are held by the Company. The Silver Punch bowl and LadleThe fifth prize is The Silver Punch bowl and Ladle presented to the company in 1720, and likewise had medals appended to it by its winner. It had inscribed on one side the common seal of the Company, and on the opposite side the reverse of the seal; and between those, on one side a Saint Andrew, and on the other the following inscription: "Edinburgh, 20th June 1720. - The Councill of the Royall Company of Archers." ; 16mo 6" - 7" tall; 110 pages

Title: Poems in English and Latin on the Archers and Royal-Company of Archers