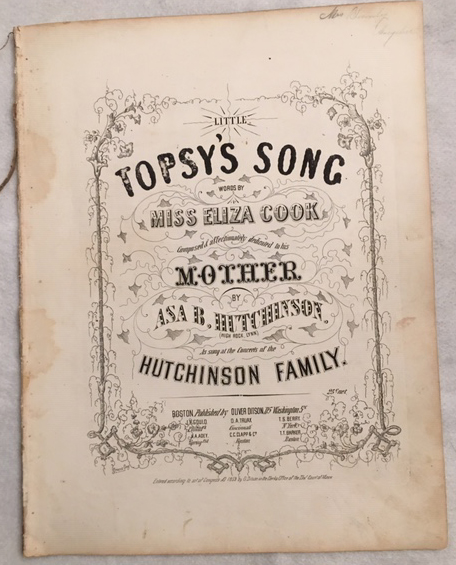 By: Cook, Eliza (words) and Asa B. Hutchinson (music)

The lyrics of Little Topsy's Song were written by British poet, Eliza Cook with the music by Asa B. Hutchinson ot the Hutchinson Family Singers. Eliza Cook was born in England and began writing poetry at an early age. She eventually became a Chartist, advocating a kind of early feminism that espoused the freedom of women, politically, culturally and sexually. Evidence indicates that Cook was a lesbian and she lived for many years with actrrss, Charlotte Cushman. Asa Hutchinson was the musical composer for the Hutchinson Family of singers. This group was one of the first, maybe the first, truly popular act in the United States. They sang songs of social and political protest, frequently advocating the cause of abolition. For such a pair as Cook and Hutchinson (with Topsy's creator, Harriet Beecher Stowe, looming in the background), "Little Topsy's Song" is something of a let down. The song presents Topsy first as the system of slavery in the South would see her; then as humanity would see her. Unfortunately, b