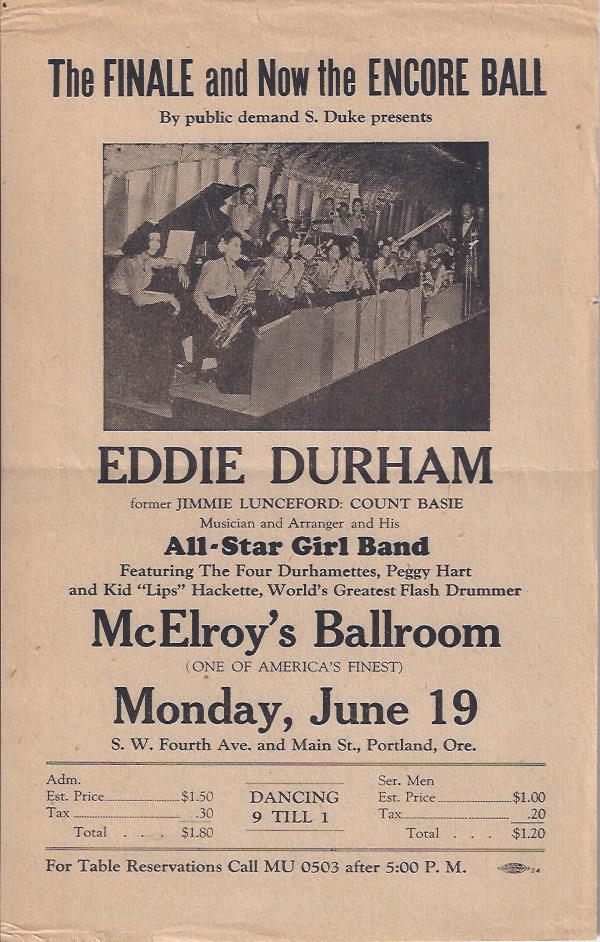 This handbill (6X9.5) features a photograph of Eddie Durham's All-Star Girl Band and announces their appearance at McElroy's Ballroom in Portland, Oregon. The Ballroom is called, "One of America's Finest." Eddie Durham was a band leader, composer, trombonist and pioneering electric guitarist. In the 1940's, with many musicians at war, Durham featured his All-Star Girl Band. The performance advertised in this flyer seems to be from 1944-- at least, I have found an appearance by this group at McElroy's in that year. Among the members of the band were the Four Durhamettes, Peggy Hart and Kid 'Lips' Hackette. In 1945, this band and a few others disbanded as male musicians returned. Their time in the spotlight, like that of Rosie the Riveter and female baseball teams, was limited by returning soldiers. Ephemera from one of these female bands is quite scarce. This flyer has some minor edge and corner wear and expected aging. Overall, it is close to VG+.; B&W Photograph of Band; Small 4to 9" - 11" tall; 1 pages