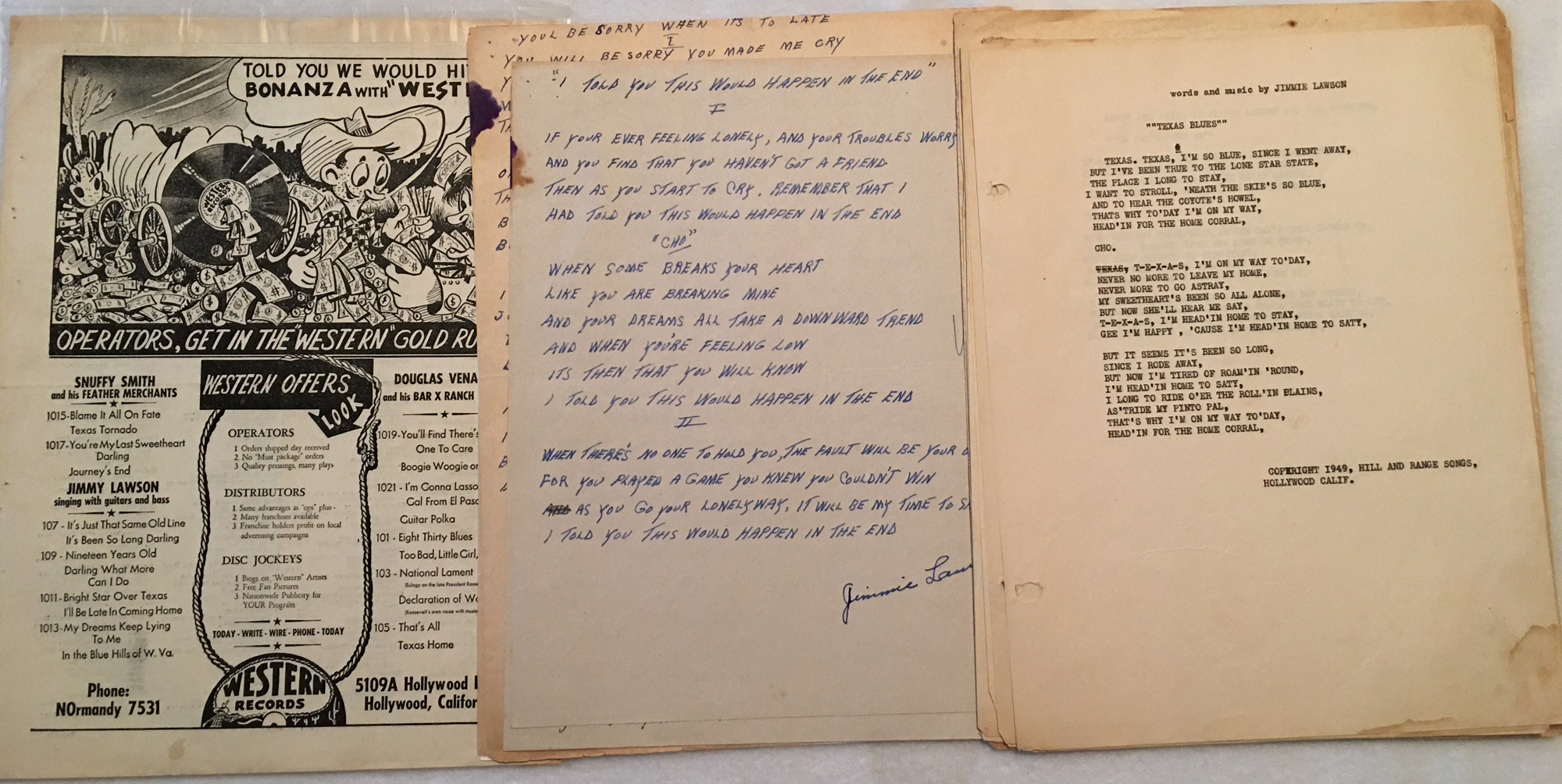 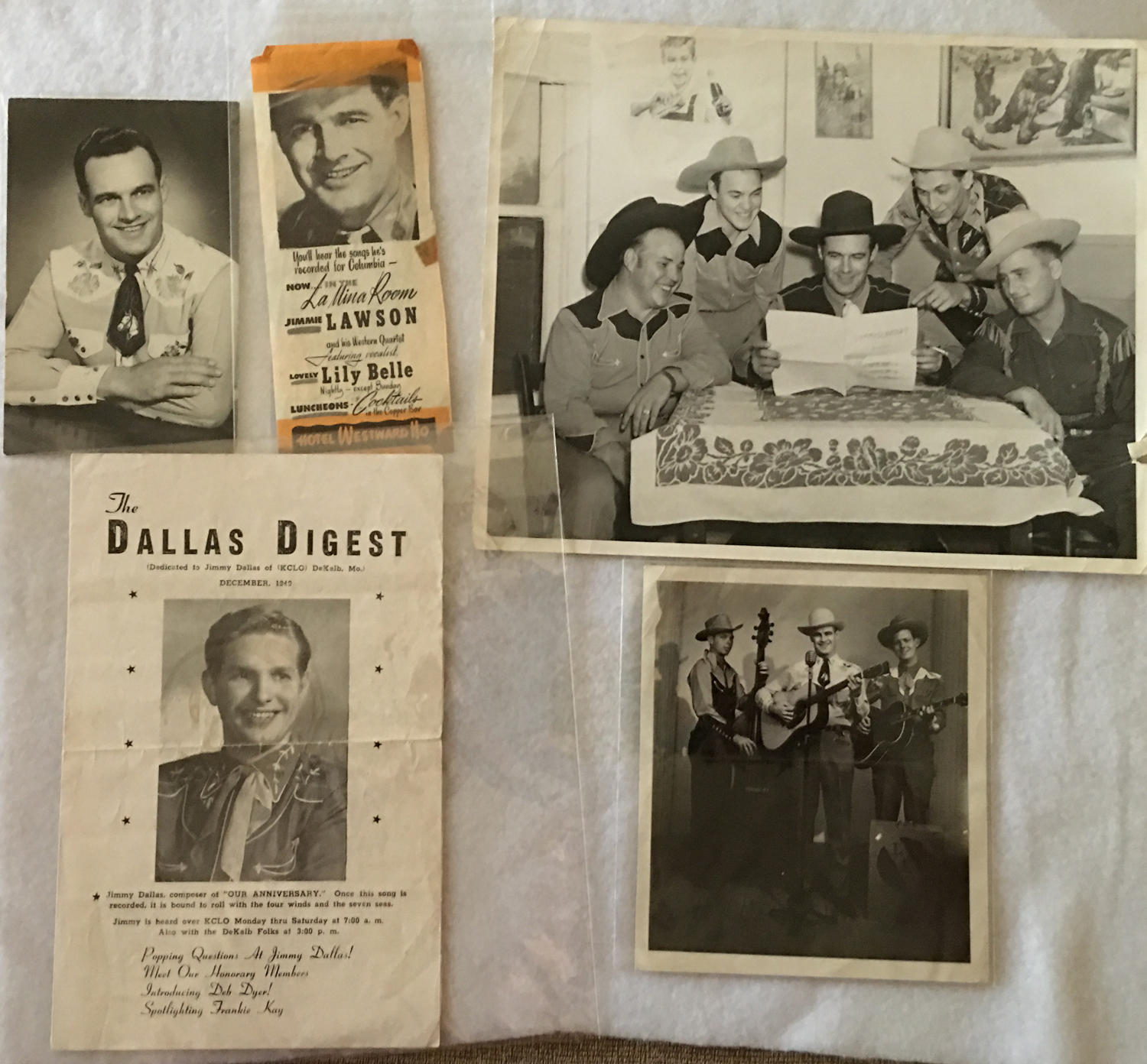 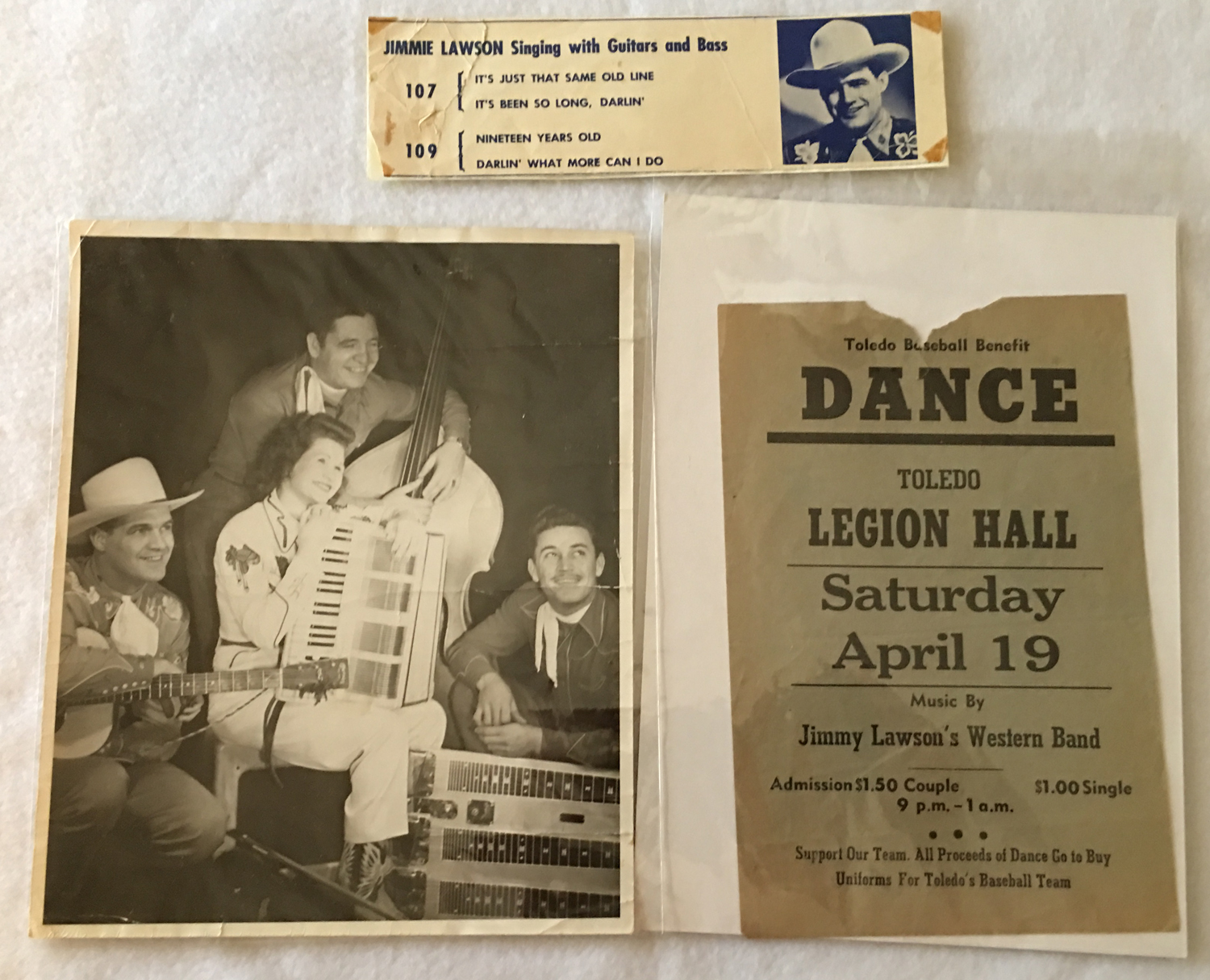 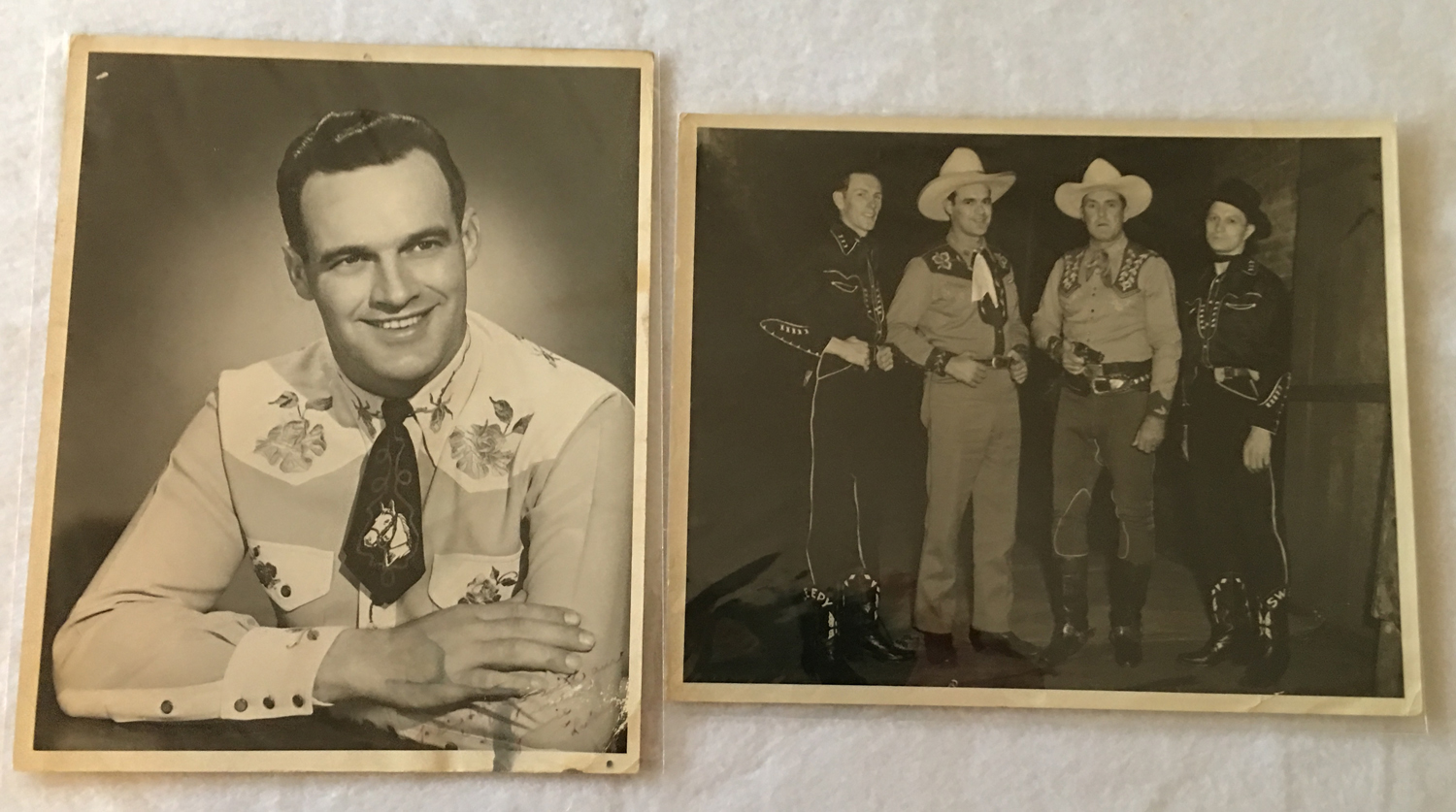 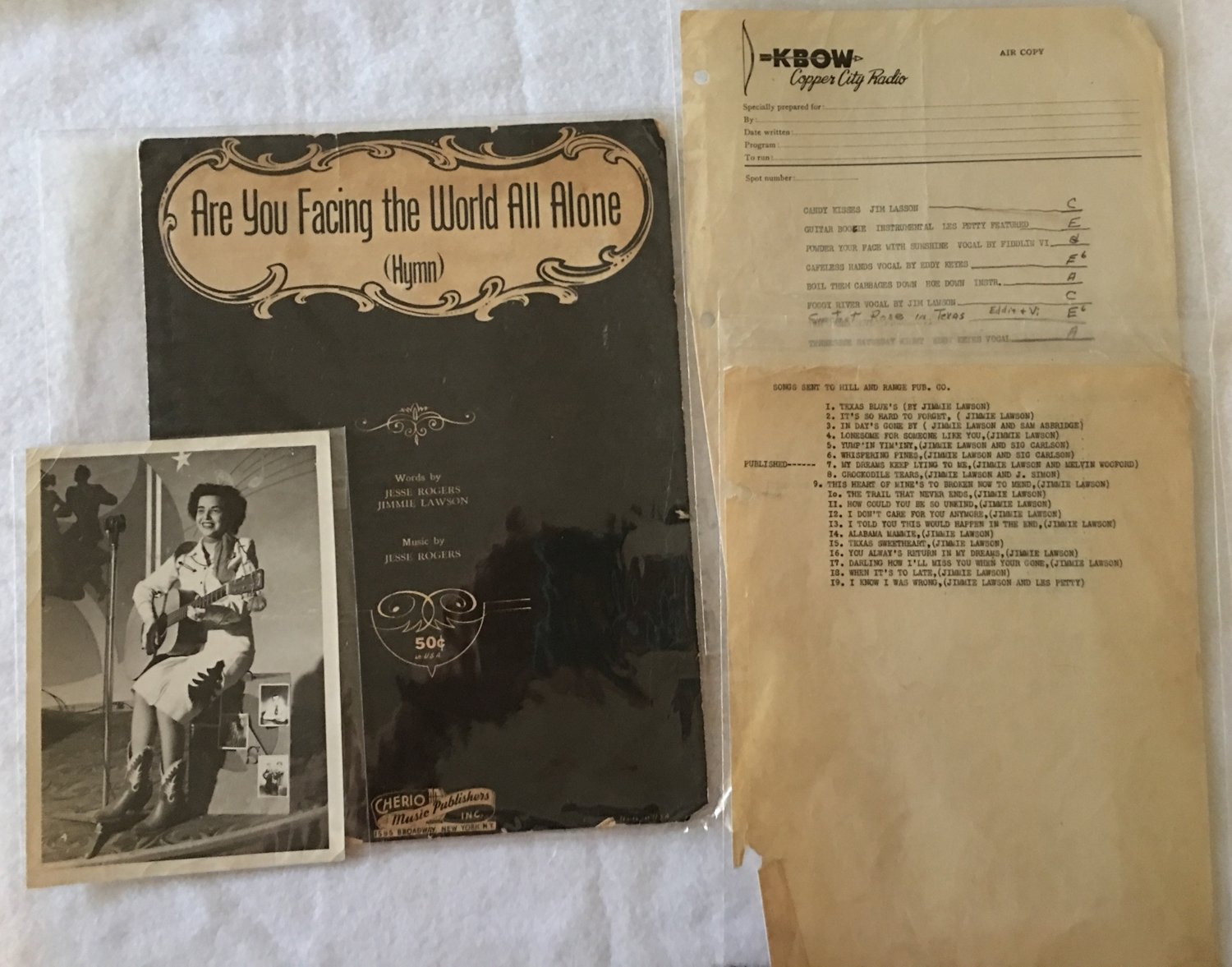 Jimmie Lawson was a country and western singer, songwriter and actor in the 1940's and 50's. This archive consists of 31 pieces. There are 7 photographs -- 4 8X10's and 3 smaller ones (all appear to be professionally done.) There are 17 sheets with song lyrics by Lawson -- 8 are typed; 9 are handwritten. One of the typescripts lists a copyright date and says that the words and music are by Lawson; none of these sheets includes the musical notation. There is a double-sided advertising sheet for Western Records that lists releases by Lawson and others. There is a copy of the Dallas Digest -- a fanclub magazine for Jimmy Dallas that includes a brief article on Lawson. There is a double-sided typescript that lists songs by Lawson sent to Hilland Range Publishing Co. There is a letterhead sheet for KBOW, Copper City Radio (probably Butte Montana) with a list of performers and their songs for a Saturday night program. There is sheet music from Cherio Music Publishers for the song, "Are You Facing the World All Alone" by Jimmie Lawson and Jesse Rogers. There is a small handbill for a performance of Lawson La Mina Room of the Hotel Westward Ho. There is a small advertising card showing a photo of Lawson and listing four of his songs. And finally, there is a handbill for a dance at the Legion Hall in Toledo (Ohio, I assume) for a dance featuring Lawson and his band. Information on Jimmie Lawson is somewhat scarce. He was a C&W singer and writer who appeared on radio programs, recorded a good many songs, wrote most of his own material, and even acted in a couple of movies. He is one of many, lesser known country singers who helped the music develop a national audience by the late 1950's. This is a very nice archive. This material varies in condition from G+ to NF. Most of the items listed are VG or better. ; B&W Photographs; 31 pages