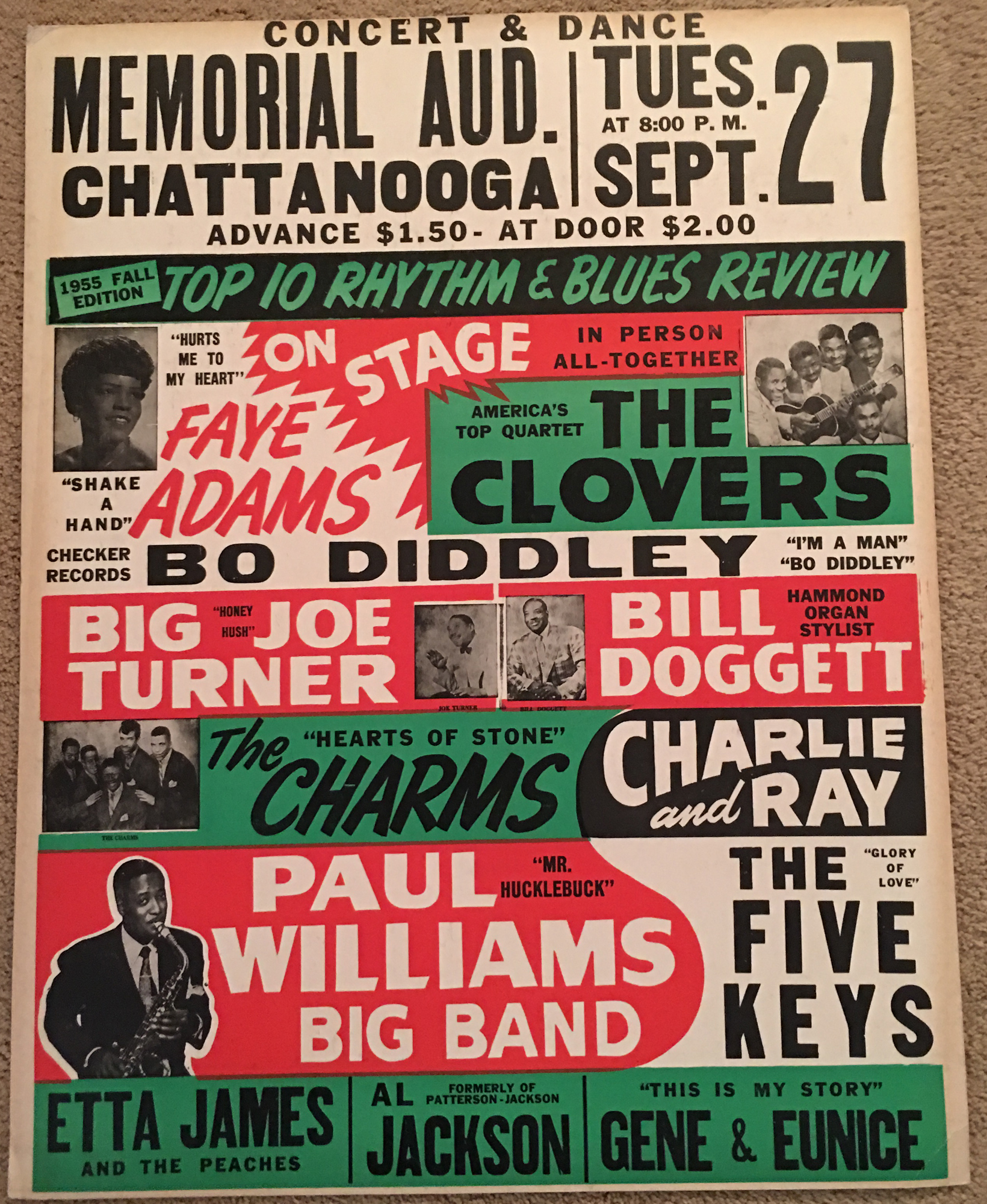 An original jumbo Globe Posters window card printed in the summer of 1955 for a blockbuster 12-act R&B concert tour overloaded with talent. There is some corner wear and aging but this is probably an unused poster since it came from 40 years of storage. The poster features the "Top 10 Rhythm & Blues Review." And that wasn't hype: the dozen acts on this poster combined for a staggering SEVENTY-THREE Top 10 R&B hits in their careers. Top Ten! If you wanted to cite the Top 20 instead, that number reaches up over 100. If you listened to the radio at all and this show came to your town, how could you not have gone?This poster is so stuffed with musicians that Globe Posters, the printer, didn't even have room for their usual credit in the bottom margin. They preferred to work in song titles, photographs, descriptors, backing musicians or record labels for (almost) everyone. And these artists did more than just tickle the top of the charts; they dominated. The Clovers in the fall of '55 had had 15 consecutive Top 10 R&B hits and were featured in the All-Black-cast movie Basin Street Revue; thus the well-earned tag, "America's Top Quartet." Faye Adams' two song titles on the poster were #1 R&B for a combined total of almost four months. Bo Diddley's first single for Checker (a subsidiary of Chess) went to #1, and both its titular A-side and seminal B-side are listed, which is way cool and helps make up for no picture of Bo."Honey Hush" is given by Big Joe Turner's name, and all that did was stay at #1 for two months. Almost makes you forget about his era-defining "Shake, Rattle & Roll" in 1954, which lodged at #1 for 'only' three weeks. The Charms with "Hearts of Stone"? Two months at #1. On the other hand, "Hammond Organ Stylist" Bill Doggett was a man of the future; no solo success yet, but his "Honky Tonk" would devour the #1 spot for three months the following year. The Five Keys with "Glory of Love" by their name? Numero uno for only (yawn) one month.But the king of them all is bandleader Paul Williams, called "Mr. Hucklebuck" on this window card for a reason. Six years prior, his hit "The Huckle-Buck" was #1 for a jaw-dropping 14 weeks on Billboard's R&B singles chart. Now that's dominance.And then way, way down in the lower left corner, without a picture, without a song title, without a record label and getting no respect, is future Rock and Roll Hall of Famer Etta James (along with several other future HOF'ers found here, btw). But like so many others on this poster, she passed her initiation by having, yes, you guessed it, one hit record thus far that lodged a full month at #1: "The Wallflower."You know you've got a monster poster when a bottom-billed no-credit musician has already been #1 for a month. And it only gets stronger going upwards. Sorry, music fans, next time we'll try to offer you a poster with some hits on it.Measures 22" x 28.5", made of cardboard and advertising a "Concert & Dance" in Chattanooga, TN on Tues., Sept. 27, 1955. In Very Good Plus condition, with diagonal crease to lower right corner and the upper left, rubbing and wear to corners and edges, and some toning, mainly on the borders as the green & red colors remain very strong. The poster also features a fantastic color scheme. Comes with COA. ; B&W Photographs; Elephant Folio 23" tall; 1 pages