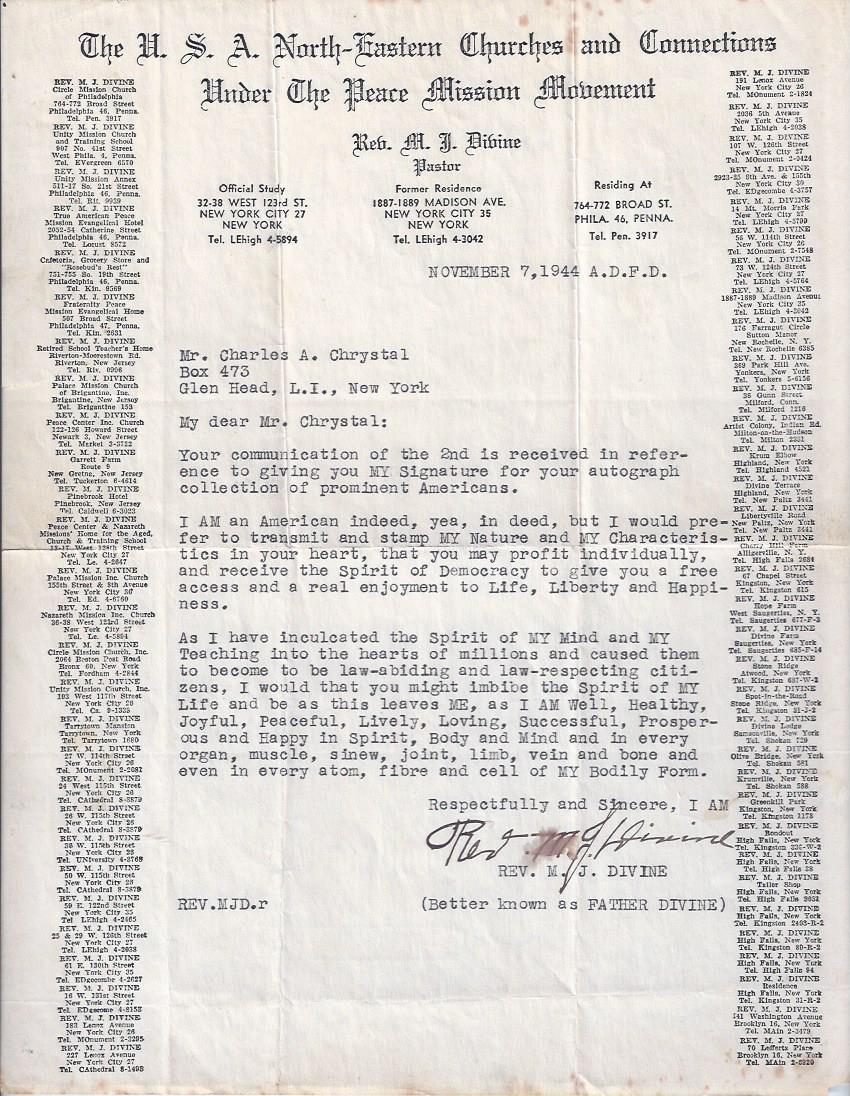 An engaging letter from the charismatic and controversial spiritual leader, Father Divine, exuding his characteristic and infectious positivity. Father Divine (1877-1965), also known as Reverend M. J. Divine, was a prominent African-American spiritual leader from about 1907 until his death. Allegedly born on a plantation in Georgia, his full self-given name was Rev. Major Jealous Divine. During the Great Depression, Divine founded the International Peace Mission movement, formulated its doctrine, and oversaw its growth from a small and predominantly black congregation into a multiracial and international church. He was a contemporary of other black religious leaders such as Daddy Grace, Charles Harrison Mason, Noble Drew Ali and James F. Jones (AKA Prophet Jones). Essentially claiming to be God, Divine made numerous contributions to his followers' economic independence and advanced the cause of racial equality. Originally disregarded as a cult, the Peace Mission is now generally regarded as a forebearer of the Civil Rights Movement. Likewise, in the later twentieth century, Divine became increasingly recognized as an important social reformer. Composed two years after Divine relocated to Philadelphia (in part to avoid payments to a former member of his movement who had sued him), this letter is Divine's response to an autograph collector of "prominent Americans," Charles A. Chrystal of Glen Head, New York. The letter reads in full: "Your communication of the 2nd is received in reference to giving you MY Signature for your autograph collection of prominent Americans. I AM an American indeed, yes, in deed, but I would prefer to transmit and stamp MY Nature and MY Characteristics in your heart, that you may profit individually, and receive the Spirit of Democracy to give you a free access and a real enjoyment to Life, Liberty And Happiness. As I have inculcated the Spirit of MY Mind and MY Teaching into the hearts of millions and caused them to become to be law-abiding and law-respecting citizens. I would that you might imbibe the Spirit of my Life and be as this leaves ME, as I AM Well, Healthy, Joyful, Peaceful, Lively, Loving, Successful, Prosperous and Happy in Spirit, Body and Mind and in every organ muscle, sinew, joint, limb, vein and bone and even in every atom, fibre and cell of MY Bodily Form." The margins of the letter-head list the scores of churches and connections in the Peace Mission Movement located in New York, New Jersey and Pennsylvania. Also featured are the addresses of Divine's current residence in Philadelphia; his former residence, and his official study in New York City. The letter has light foxing at top and bottom of page, very minor separations along middle horizontal old fold and left margin, and chipping at bottom-right corner; the letter M in Divine's signature is moderately blotted.; Small 4to 9" - 11" tall; 1 pages; Signed by Author