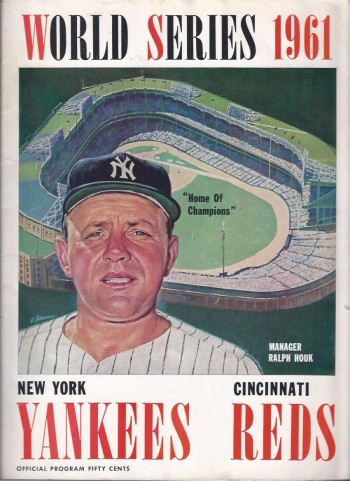 Stapled, full-color pictorial wraps with image of Yankee Stadium and New York Yankees' Manager, Ralph Houk. This copy has light, general wear and aging with a small, closed tear on the lower right margin of the front wrap. Overall the program is still VG to VG+. This is the Official Program for the 1961 World Series games played in New York. The 1961 season had marked the end of Casey Stengel's tenure as Yankee Manager. It was also the season in which Mantle and Maris fought it out for the AL Home Run Crown with Maris winning out with his record-breaking 61 homers. Their feats are recognized under their photos on page 17 and in a special section on pp. 14 and 15. The Yankees took the Series in 5 games. This is a great souvenir from one of the Yankees' most memorable seasons. ; B&W Photographs; 4to 11" - 13" tall; 52 pages