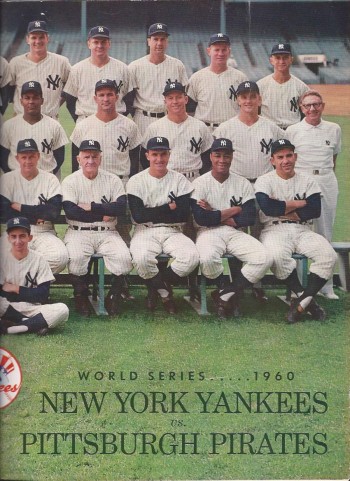 Stapled, full-color pictorial wraps with wraparound team photo of the 1960 New York Yankees. This copy has light, general wear and aging with a small, diagonal crease on the rear upper left corner. Overall VG to VG+. This is the Official Program for the 1960 World Series games played in New York. This is the Series that ended with Bill Mazeroski's walk-off homer in game 7. The cover of the program features a beautiful team shot of one of the greatest Yankee teams. Mickey Mantle is in the center on the front standing next to Roger Maris. Yogi Berra is on the end seat on the front row. Whitey Ford stands behind Maris and Mantle. Great stuff from another time. ; B&W Photographs; 4to 11" - 13" tall; 52 pages