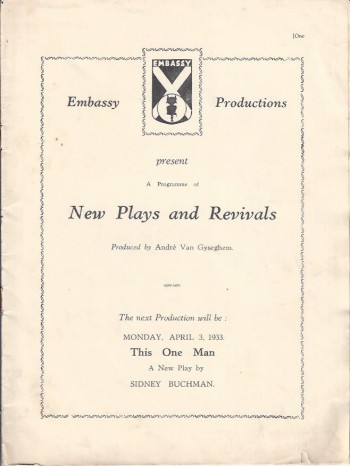 Stapled, slick, white wraps with black titles. Light edge and corner wear with one small chip on bottom front edge with a 1" slit at top of spine. The program, both exterior and interior is somewhat age-toned. Light soiling on wraps as well. Overall VG to VG-. This program is for a production in London of Eugene O'Neill's All God's Chillun Got Wings starring Paul Robeson as well as his wife, Flora. Oddly, the front wrap does not state the title but has, "Embassy Productions Present a Programme of New Plays and Revivals Produced by Andre' Van Gyseghem. However, the Program is for All God's Chillun Got Wings. This play was controversial when first produced in New York in 1924 because of its theme of interracial romance which included Paul Robeson kissing the hand of a white actress (horrors, forfend!). Founder of the Daughters of the Confederacy was aghast, “The scene where Miss Blair is called upon to kiss and fondle a Negro’s hand is going too far, even for the stage. The play may be produced above the Mason and Dixie [sic] line, but Mr. O’Neill will not get the friendly reception he had when he sent ‘Emperor Jones’ his other coloured play into the South. The play should be banned by the authorities, because it will be impossible for it to do otherwise than stir up ill feeling between the races.’ This revival of the play in London did not cause quite the same stir, though there is a nice association here since Robeson starred in this production. I can find no copies of this program on WorldCat, though it is a difficult tile to reference. ; B&W Illustrations; 8vo 8" - 9" tall; 10 pages