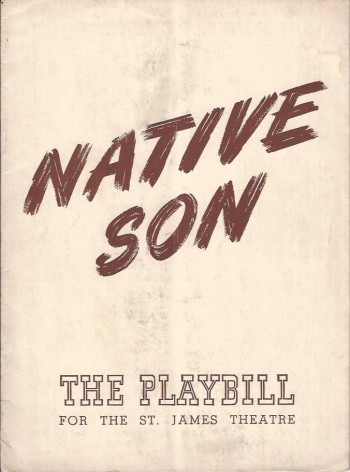 By: (Wright, Richard and Paul Green)

Stapled, beige wraps with deep brown titles. Some relatively light edge and corner wear along with an old, flattened vertical crease through the center and some mild soiling/aging on wraps. This was the Orson Welles/John Houseman Production of Native Son starring Canada Lee as Bigger Thomas. Welles and Houseman had collaborated in the Mercury Theatre and also produced an all black cast Macbeth and Haiti. This is a nice program from these two important producers. I can find only one copy of this program on WorldCat.; B&W Illustrations; tall 8vo 9" - 10" tall; 20 pages