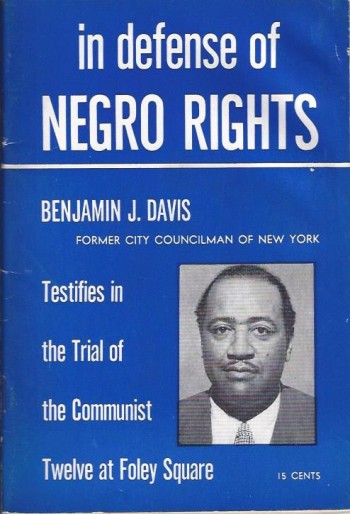 Stapled, blue wraps with white titles and B&W photograph of Davis. Some light, general edge, corner and surface wear. There appears to have been a long ago dampstain that has left some mild waviness here and there but no other damage. This is a solid VG copy. The book deals with the 1950 appeal of the trial of the Communist 12 which had taken place in 1949 in New York. Davis was one of the defendants all of whom were tried under the Smith Act of inciting violent overthrow of the government. All were convicted and sentenced to prison. The appeals did not secure freedom for the defendants. Davis and most of the others were freed after serving between three and five years. After being freed, Davis continued to speak out for African-American rights and in favor of Communism. ; Cover Photograph; 12mo 7" - 7½" tall; 64 pages

Title: In Defense of Negro Rights