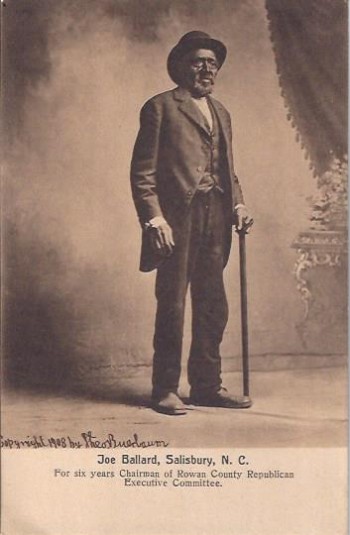 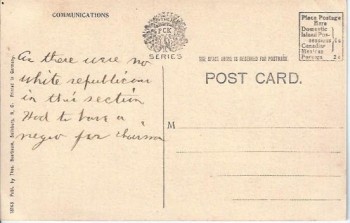 This photographic postcard from 1908 has only very light corner wear and aging. It is about near fine -- no tears, creasing or soiling. The card was published by Thomas Buerbaum of Salisbury, NC and was printed in Germany. It is part of the PCK Series. Written by han on the back is, "As there were no white Republicans in this section had to have a negro for chairman." From research I have done, Joe Ballard seems to have been a well-liked town character in Salisbury. He led parades, was a Mason, hung out around town and was for six years Chairman of the Republican Party. This card seems to be from a set that local Salisburean (?) Thomas Buerbaum produced. They probably sold well locally. On the other hand, the demonstrates rather vividly the Jim Crow South of the early 20th century. Joe Ballard was something of a town mascot. That he was Chairman of the Republican Part was a kind of joke -- no one with power in 1908 in Salisbury was a Republican, and finally, and more generally, the card shows the situation of African-Americans throughout the South at the time -- they can be liked, laughed at, even allowed to be Chairman of the Republican Party -- but they are not allowed to have any power. We even put old joe on some postcards. ; Postcard; Sepia-Toned Photograph; 24mo 5" - 6" tall; 1 pages