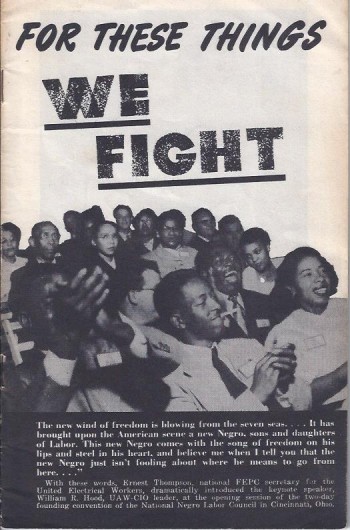 For These Things We Fight

Stapled, B&W, pictorial wraps with photograph of meeting and black and white titling. Some toning along edges but, otherwise only light wear. VG to VG+. This pamphlet is the transcript of the speech given by William R. Hood at the Founding Convention of The National Negro Labor Council. This Council which was considered a Communist affiliate by mainstream unions was promosted by Ernest "Big Train" Thompson who had been connected with other organizations connected to Communist groups. Nonetheless, The National Negro Labor Council attracted members like Hood, who came from the UAW and Coleman Young who would later be Mayor of Detroit. This organizing of African-Americans into trade Unions is an early aspect of the Civil Rights Movement that is often ignored or downplayed because of real or supposed Communist ties. This is a relatively uncommon pamphlet. WorldCat lists 17 copies in libraries, though several of those libraries yield no results when checked. I find no copies in the trade. ; B&W Cover Photograph; 8vo 8" - 9" tall; Unpaginated pages

Title: For These Things We Fight

For These Things We Fight