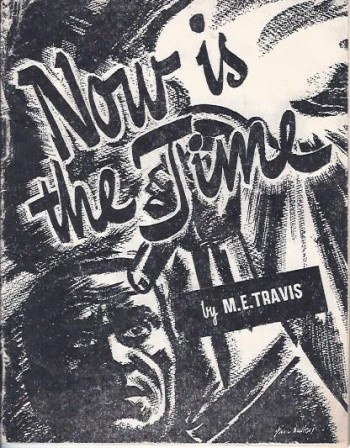 Now Is The Time

Stapled, pictorial wraps with B&W image and black titles This copy has light wear and ging except for the back wrap which suffered some sort of damage that caused a tear and creasing. This damage has been repaired with clear, almost unnoticeable, tap and a flattening of the creases. Overall this is a solid very good copy. This booklet is the transcript of a speech given by Maurice E. Travis who was the fiery Secretary-Treasure of the United Union of Mine, Mill and Smelter Workers, at the founding convention of the National Negro Labor Council. Travis, who lost an eye in an assault by white supremists i Alabama, seems to have been a courageous fight for African-American labor rights. The National Negro Labor Council was considered by many to be a Communist front organization, though Travis, who went to jail essentially for being a Communist, appealed this sentence on more than one occasion. This is an interesting and not well-remembered part of 20th century American history. This pamphlet is rather uncommon. WorldCat locates at most 11 copies in libraries, though some of those do not seem to exist. I find no other copies in the trade. ; B&W Cover Art; 24mo 5" - 6" tall; 30 pages

Title: Now Is The Time

Now Is The Time