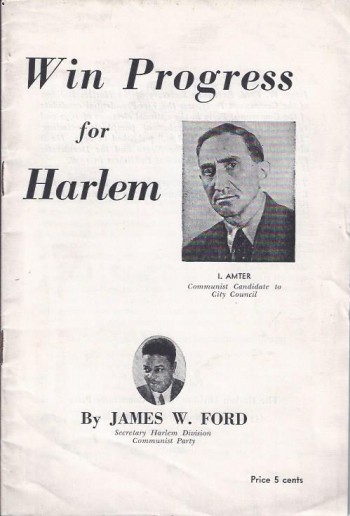 Stapled, white newsprint self-wraps with B&W images of Israel Amter and James W. Ford and black titles. Some light wear and general aging with a crease on the bottom rear front corner that affects several pages. VG to VG+. This pamphlet's purpose seems to be to support the candidacy of Israel Amter for the New York City Council. Amter had been one of the founding members of the Communist Party USA, and frequently ran for office. The author, James W. Ford, was, at this time, the most influential African-American in CPUSA and had run for President -- the first African-American to do so. Ford promotes Amter's candidacy but also emphasizes programs and reforms that the Communist Party supported for black Americans. Ford was an important Civil Rights leader whose close involvement with the Communist Party has caused him to be somewhat forgotten. This is a relatively scarce pamphlet. WorldCat locates only ten copies in libraries. ; B&W Photographs; 12mo 7" - 7½" tall; 32 pages