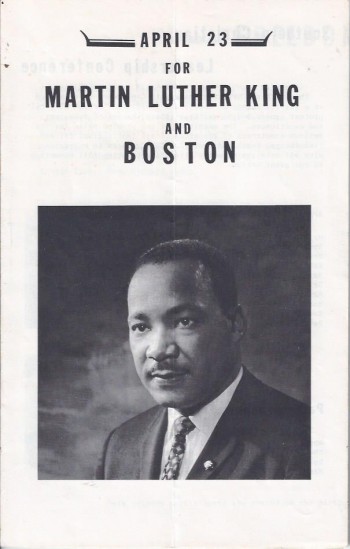 Tri-fold (8 pp.) pamphlet for April 23,1965 rally in Boston for Martin Luther King. The pamphlet measures 5.5X9.5 and is accordion-folded. There is very light, general wear along with light toning on edges. There is an old, mostly flattened, but stll there, vertical fold where this was probably placed in a pocket. There is some toning along these fold lines as well. Overall the pamphlet is VG. The only date on the pamphlet is April 23, but there was a rally in Boston on that date in 1965, a little over a month after "Bloody Selma." The pamphlet features information on the Southern Christian Leadership Conference, names of the officers of the Massachusetts Unit of the SCLC, the order of events, portraits of the speakers (Alan Gartner, Ruth Batson, Ralph Abernathy, and Martin Luther King, Jr.), song lyrics, marching instructions, a "Message from Rev. Virgil A. Wood," and a "Message from Dr. Martin L. King." This march was intended as a peaceful protest against the slum conditions and discriminatory segregation of African Americans in Boston. This pamphlet comes from a tumultuous period in the Civil Rights Movement when the Civil Rights Act was taking shape and events like Selma were beginning to affect the consciences of white people everywhere. Copies of this pamphlet are quite unusual. WorldCat locates one only in the Boston Athenaeum.; B&W Photographs; Small 4to 9" - 11" tall; 8 pages