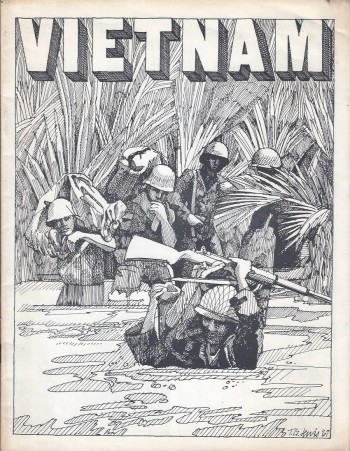 Stapled, comic book styled book in black and white white title on front. This copy has some light age-toning mainly on edges along with light, general wear from usage. Overall it is VG, perhaps slightly better. The cover drawing on this comic is signed by T. G. Lewis and dated '67. There is no other publication information or indication of the author. However, the story was written by Julian Bond after he was denied his seat in the Georgia Legislature because he had agreed with the SNCC statement opposing the Vietnam War. The story is a history of the War, and opposition to it, especially by blacks. The story is simple and straightforward, made more powerful by Lewis's art. This work has been reprinted on-line by The Sixties Project, but this copy is one of the few originals. WorldCat locates only eight copies in libraries though some of these seem to be reprints. ; B&W Cartoons; 4to 11" - 13" tall; Unpaginated pages