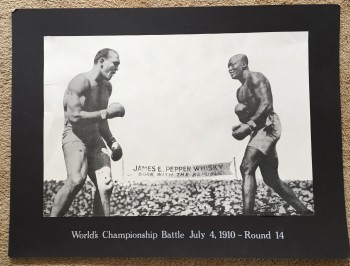 The 1st African-American Heavyweight Champion of the World, Jack Johnson, defended his title against Jim Jeffries in ‘The Fight of the Century’, in Reno, NV, July 4, 1910. A great deal has been written about the fight, especially the racial overtones, the subsequent riots and Johnson's fast and loose lifestyle. A two-hour film was made of the fight and Jack London was one of the reporters present. The fight was sponsored by the James E. Pepper Distilling Co. After the fight the company issued a series of posters of photos , including a secene from Reno, one of Johnson enjoying a glass of whiskey, Johnson collecting his winnings and this one, the winning puches in Round 14. There seem to have been serveral versions. - the photo with no caption, one with a white border and a caption and this one mounted on black with a silver caption. On Pepper's website there are two posters, one with a white border and one with the black mounting. Image is 11 x 16. the mat 15 x 20. Condition is VG with a 1" closed tear at the left edge of the image and some wear to the corners of the mat. ; Folio 13" - 23" tall; 1 pages