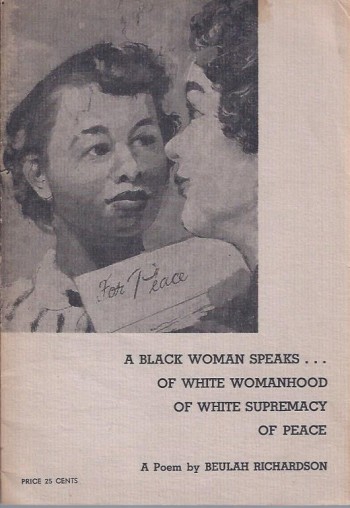 Stapled, beige wraps with image of two women -- one black, one white. This copy has only very light general wear and aging. The booklet, which is 12 pages (unpaginated) is a poem written by Richardson in 1951 and read by her at The Women's Workshop at the American Peace Congress held in Chicago in 1951. Richardson is more well-known under the name Beah Richards which she used for her long acting career and under which name later editions of this poem were printed. Richards was nominated for an Oscar in Guess Who's Coming for Dinner and one an Emmy for a guest appearance on the TV show, Frank's Place. She was also a Civil Rights activist, friend and supporter of Paul Robeson and American Communist until the revelations by Nikita Kruschev in 1955. WorldCat is a little vague on how many copies of this edition are in libraires since they seem to list all copies under the name Beah Richards. My guess is that this first edition is held by fewer than 20 libraries. ; B&W Cover Illustration; Small 8vo 7½" - 8" tall; Unpaginated pages

Title: A Black Woman Speaks ... Of White Womanhood Of White Supremacy Of Peace