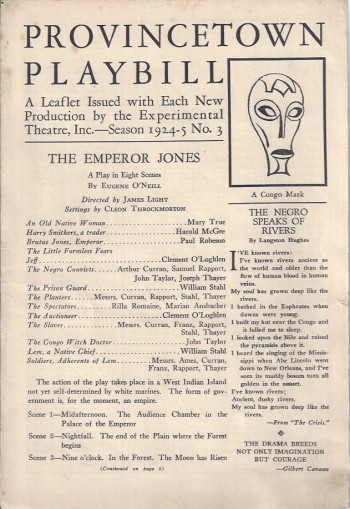 Bifold program, making six pages on beige stock. Very light wear and aging with a few toned spots. The program also has a very small tear and a short slit at bottom of initial fold. Overall the program is in VG+ condition. This rare playbill came out the same season that the Experimental Theatre did "All God's Chillun Got Wings," which also starred the young Paul Robeson. Here, Robeson played one of his more famous roles, Brutus Jones Emperor, the title character in Nobel Laureate Eugene O'Neill's drama. This play premiered in Provincetown in 1920. This program is from the 1924-5 season and features the cast of the play, and essay, "The Negro as Artist" by Walter White, Langston Hughes' poem "The Negro Speaks of Rivers and many ads. The program is quite scarce. OCLC locates only two copies. ; B&W Illustrations; Large 8vo 9" - 10" tall; 6 pages