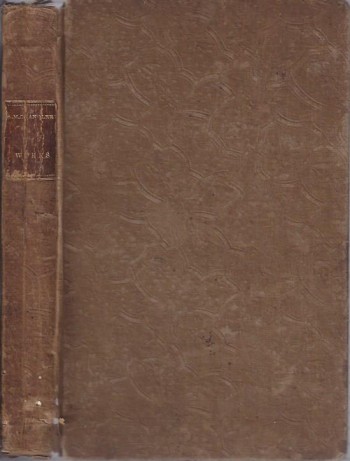 Full leather, patterned, with faded gilt titles on red panel on spine.Edge, corner and surface wear with light area of damage at top of spine and rubbed corners. One signature is slightly pulled, but book is square and binding secure. Some interior toning and foxing. Tissue guard on frontispiece present. Solid copy. This is two volumes in one, as, it appears, most copies were. The poems comprise the the first 180 pages followed by 120 pages of essays. Chandler was a Quaker who devoted her life to the cause of abolition in her poetry and essays. Her poem, "The Slave Ship,' brought her national attention. while "The Kneeling Slave" with its engraved image became so omnipresent that today we would say that it has "gone viral." After moving to Michigan in 1830, Chandler edited Benjamin Lundy's Abolitionist Journal and founded The Logan Female Anti-Slavery Society which became a main link on the Underground Railroad to Canada. She died suddenly at age 27 in 1834 and this book of her works was published by Lundy who also wrote an account of her life. Chandler's was an important and impassioned voice in the abolitionist cause. Only in recent years has her importance and influence begun to be recognized. ; B&W Frontispiece of Chandler; 12mo 7" - 7½" tall; 180, 120 pages