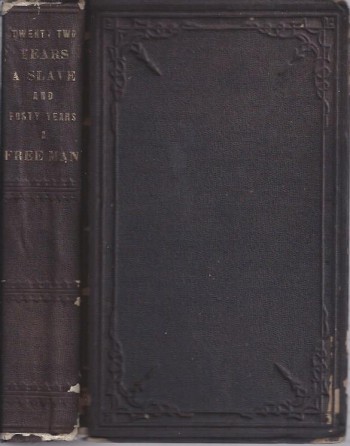 Illustrated with woodcut plates. Original blind-stamped brown cloth, lettered on spine in gilt. Laid in is a manuscript leaf with period religious reflections. Steward, a fugitive slave from Virginia, settled in Rochester, NY and participated in the underground railway. Somewhat uneasy under the protective laws of New York, he relocated to the Wilberforce Colony in Canada and worked particularly toward the emancipation of slaves from Ohio. He eventually returned to Rochester where he died of typhoid in 1867. He was one of many unsung African-Americans who worked to free slaves. Nicks and chips to cloth at spine ends, edges and corners, lettering faded a bit; Light foxing; Square and securely bound with no tearing or parting. Overall about VG. Blockson 10166 (blockson lists the 1st edition); Work p. 313 (Work lists this edition.) ; B & W engraving; 12mo 7" - 7½" tall; 360 pages; Stated Fourth Edition of self-published autobiography of Austin Steward. This edition came ten years after the first and was part of Steward's attempt to raise money after the death of his daughter in the early 1860's. Steward was an abolitionist, born a slave in Virginia in 1794 escaping from his master in New York around 1815. Sold SMU 12.8.10