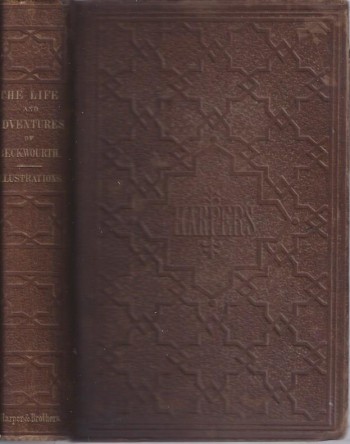 The Life and Adventures of James P. Beckwourth, Mountaineer, Scout, and Pioneer, and Chief of the Crow Nation of Indians

Frontispiece and 12 wood-engraved plates included in the pagination. Original blindstamped cloth with faded spine lettered in gilt. Some edge, corner and surface wear with very minor damage at spine ends. Former owner's name on front pastedown along with very brief notes in pencil on rear pastedown. Book is square and binding secure with no tears or parting except for very short start at bottom of front hinge. Overall, a solid very good copy. Jim Beckwourth (c.1800-1866 or 1867) was an American mountain man, fur trader, and explorer. AnAfrican-American born into slavery in Virginia, he was freed by his father (and master) and apprenticed to a blacksmith; later he moved to the American West, where as a fur trapper, he lived with the Crow Nation for years. Wagner-Camp notes that "After many years in the Rockies as a mountain man, Beckwourth journeyed west from New Mexico to California, arriving in 1844. Two years later, he came back to New Mexico with a drove of stolen horses. He returned to California, discovered the pass through the Sierra Nevada that still bears his name, and operated a hotel and trading post in Beckwourth Valley. Sometime after 1858 he returned to his old life in the Rockies. He testified in the Sand Creek investigation in 1865 and died in the following year." Blockson 3235; Cowan p.41; Field 149; Graff 347; Howes B601; Sabin 4265; Streeter 2101; Wagner-Camp 272:1.; B&W Drawings; Small 8vo 7½" - 8" tall; 537 +ads pages; sold Baumans new list 10.30.18

Title: The Life and Adventures of James P. Beckwourth, Mountaineer, Scout, and Pioneer, and Chief of the Crow Nation of Indians

The Life and Adventures of James P. Beckwourth, Mountaineer, Scout, and Pioneer, and Chief of the Crow Nation of Indians