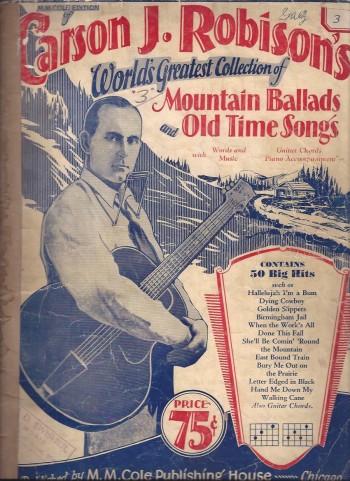 Stapled, pictorial wraps (image of Robison) with a taped spine edge and much edge, corner and surface wear. Name and number sticker in top right corner. Music store stamp, bottom left. Some songs in the Table of Contents have notations and there are pencilled in chord markings in a few of the songs. This book was obviously used by a player or performer. Overall G-. This is an excellent collection of early country folk ballads, sung by Carson Robison. The songs include: Hallelujah I'm a Bum, Birmingham Jail, Golden Slippers, Hand Me Down My Walking Cane, The Hell Bound Train, The Death of John Henry, Barbara Allen and many others. Carson Jay Robison (August 4, 1890 - March 24, 1957) was an American country music singer and songwriter. He originally worked and sang with Vernon Dalhart though the two eventually went their separate ways. Robison is in The Nashville Songwriters Hall of Fame. Although his impact is generally overlooked today, he played a major role in promoting country music in its early years through numerous recordings and radio appearances. We have other sheet music by Robison and a signed photo. Please inquire. ; Musical Notation; 8vo 8" - 9" tall; 67 pages