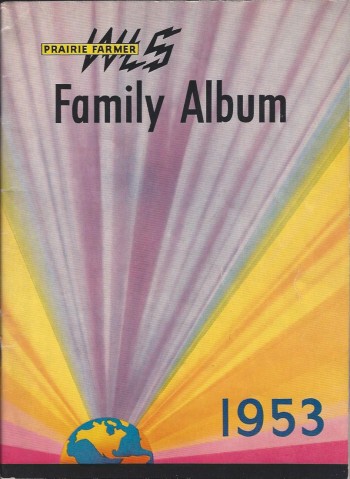 By: (The Prairie Farmer)

Stapled, pictorial, brightly-colored cover with image of earth shooting forth many-colored rays, probably suggesting the modern age of the 1950's. This copy has some light, generally flattened, creasing on the wraps along with very light edge and corner wear. A very attractive copy. The WLS Family Album was an annual publication of Chicago's WLS radio station. This yearbook, published by the Prairie Farmer, emphasized the country roots of WLS and featured their cast of early country music performers and their National Barn Dance show. Among the well-known performers who were on WLS shows at this time were: Bob Atcher (who has signed and inscribed his photograph), Arkie the Arkansas Woodchopper, Homer and Jethroe, Lulu Belle and Scotty and the Hebron Basketball Team. Many lesser-known early country performers are also pictured and described along with staff members and families. By the the late 1950's WLS was on its way to becoming a rock and roll station, and many do not remember its country roots. ; B&W Photographs; Small 4to 9" - 11" tall; 56 pages; Signed by Associated